Drivers have little sympathy for Hamilton 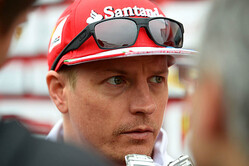 While the rest of us might have agonised along with Lewis Hamilton as he tried to change his engine mode in Baku, unable to get team assistance following the radio communications ban, his fellow drivers aren't quite as sympathetic.

Asked at today's press conference whether they understood the Briton's frustration, and whether they too though the radio ban should be relaxed and teams allowed to help, the drivers were of the opinion that Hamilton should have done his homework beforehand.

"I think it's fine," said Kimi Raikkonen of the radio ban, though the Finn himself ran into problems in Baku. "In certain situations, you might have some issues where you want help, but rules are rules and it's the same for everybody.

"It wasn't a big issue," he said of his own predicament in Baku, "I knew what it was, I just wanted to get some kind of confirmation. It didn't change anything.

Asked if he had any sympathy for Hamilton's plight, Daniel Ricciardo shrugged and said: "Not really. Obviously, not really directed at Lewis, I think anyone in that position... on race day you care about yourself so you don't feel any sympathy for anyone else in those two hours on a Sunday.

"Kimi touched on it," he continued, "It is what it is, it's the rules. Everything we can do is in front of us, somethings, if there's a failure during the race, then the team is allowed to tell us the procedure, perhaps fix it, for example an electronics issue.

"But in terms of engine modes, things like that, sure, there's a lot to do, but we know, or we should know, where it all is. So we've had to adapt to it but it's been OK."

"You have to prepare yourself for many scenarios, try to provide for these things and see what might happen. Of course, it's impossible to see everything but it hasn't been an issue for me."

"You try to know the most you can, what you have to do in the race," said Felipe Nasr, "there are some things we can cover, and other things depend on the team communication... they are not allowed to say, but I haven't faced anything yet. It is what it is."

"I like the idea," smiled Esteban Gutierrez, " because it will motivate the engineers to get rid of some of the buttons. We just need two pedals and one steering wheel."