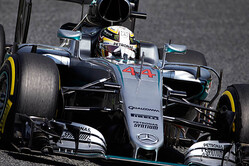 The 2016 Formula One World Championship continues this weekend with Round Eight, the European Grand Prix, from the Baku City Circuit

Lewis Hamilton: Last weekend was a really positive one for me. I felt strong on Friday, got the pole on Saturday and then just felt phenomenal in the car during the race. The balance was perfect and I had the speed whenever I needed it, which is everything you want as a driver. After the first five races, I could never have predicted I'd be back at the sharp end of the title fight so soon. But we're starting to have cleaner weekends as a team and are showing real strength as a unit - coming through with results even when things aren't perfect. That's a big confidence boost for everyone. Winning is our lives - it's what we work all day for and go to bed dreaming of. Of course, there's still a very long way to go and work to be done. From my side, there's never been a doubt in my mind in terms of what I can do with this car and I've shown once again that I'm just as focused as ever. I can't wait to get to Baku, experience another new country and see what we can do out on track.

Nico Rosberg: Canada unfortunately didn't work out as planned. But that's how things go when you're pushing the limits and I'm not going to change my approach or start backing down. I'm in this Championship battle to win it - not to settle for second best. Now we head to Baku, which is going to be a massive challenge. It's a completely new track and a street circuit too, which makes it even more difficult. I've done some work in the simulator, of course, to get a feel for what to expect and to learn the layout. Ferrari and Red Bull are very close to our pace now, so any tiny difference we can find this weekend could make the difference. I'm excited to get out there, get to know the track and a new city and hopefully get myself back to the top after a tough few races.

Toto Wolff, Head of Mercedes-Benz Motorsport: After Monaco, Canada was another case of good teamwork bringing a result which could easily have gone the other way. Both drivers lost position at the start and, on the same strategy, it would have been extremely tough for Lewis to get past Sebastian. The speed of both the Ferrari and Red Bull is pretty much where we are now, as demonstrated by the battle between Nico and Max late in the race. We are seeing the convergence of performance between teams that naturally comes with stable regulations - and that has made the competition tougher than ever. Our performance in the garage, on the pit wall and during the stops was flawless last weekend - but there are still areas we must improve. Starts are the prime example. We've had a couple of great starts this season but also a few that were not so good, which is something we need to analyse and understand. At one third distance this season, we are in an enviable position. But we will have to work extremely hard to maintain it. The next battle takes us to Baku and a brand new venue for Formula One, which is great for the sport. We're looking forward to the challenge of a new street circuit.

Paddy Lowe, Executive Director (Technical): After an enjoyable but rather chilly weekend in Canada, we head for the warmer climes of Azerbaijan - whose 30 degree heat will be a welcome contrast to the 12 degrees on the pit wall during Sunday's race! Combine those high temperatures with a low downforce circuit configuration, freshly laid tarmac and the unknown quantity of a new venue, and we're set for an entertaining weekend ahead. The early sessions will see a lot of cars sliding around on track - which is great for the spectacle, even if the drivers will inevitably be complaining! We're excited to go to a brand new venue in Baku - a city very few in the paddock will ever have visited before. As we travel around the world, it never ceases to amaze me how many passionate, dedicated and knowledgeable supporters this sport has - even in places we've never been to before - which is very humbling. So, we very much look forward to the weekend and hope to put on a great show for the first Grand Prix in Azerbaijan.