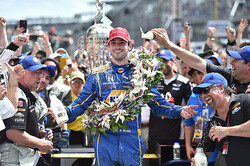 The American youngster, who though signed as reserve driver with Manor and scheduled to attend 11 Grands Prix this year and "help develop the MRT05" but has yet to sit in the car, has won the world's most famous race, the Indy 500.

Shunned by Haas, who claimed there wasn't an American "out there" with the relevant F1 experience, Rossi, was confirmed by Andretti Autosport in February.

Weeks later, following his rookie test at Sebring International Raceway, it was announced that he would be returning to "the Manor Racing fold" as official reserve driver, performing his F1 and IndyCar roles simultaneously.

Yesterday's 100th running of the legendary event was very much a case of 'last man standing', with rookie Rossi at one stage running 33rd.

Fuel strategy (sigh) played a major part in the race, and it was Rossi's gamble which was to pay off, though the youngster ground to a halt on his victory lap.

He took the lead on the 197th of 200 laps on the 2.5-mile oval when teammate Carlos Munoz stopped for fuel and it was a race of precision driving to the finish.

Running dangerously close to empty after stretching his 18.5 gallons of ethanol for 36 laps, Rossi all but coasted the final lap with the team cheering him on through the radio.

The Californian slowed his pace dramatically for his final four laps; his last lap averaged 179.784 mph, nearly 40 mph slowed than Munoz's final lap, however he still had enough momentum to take the chequered flag across the famous yard of bricks by the largest margin of victory since the 1996 race.

"I've no idea how we pulled that off," he told reporters. "The only actual site of an oval that I'd ever been to was Phoenix in February. I'm definitely a rookie on ovals.

"Obviously street courses I have an understanding about," he continued, the American, the ninth rookie to win the Indy 500, having been in Monaco a year earlier. "But IndyCar is a whole different can of worms than anything I've been a part of. It's incredibly competitive and incredibly close. You have to be perfect all three days, everyone around you, drivers and teams.

"I'll cherish the fact that at one point we were 33rd," he added. "We rolled the dice and came through and made it happen. This is unbelievable. I have no doubt it's going to change my life."

"Unbelievable, unbelievable," said team owner Michael Andretti. "They did a great job with strategy. To get a 1-2 finish is great," Andretti said. "We're just so happy. It's so awesome."

"I have to thank Michael Andretti and Bryan Herta for giving me such a wonderful race car all month," said Rossi. "We ran out of fuel in Turn 4 and we were clutching it and coasting it down the back straight. We knew it was going to be tight but Ryan (Hunter-Reay) helped give me a tow to the finish the last couple laps there and it was an amazing result."

Rossi now stands 6th in the championship on a tally of 203 points, just two points behind James Hinchcliffe, and will head to Detroit next weekend for the seventh round of the 2016 season.