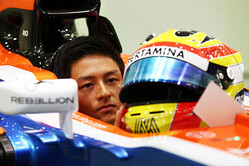 Rio Haryanto's manager, Piers Hunnisett, has admitted that the Indonesian driver only has funding to keep his seat at Manor up until the Hungarian Grand Prix.

"The sponsorship is all paid for up until the eleventh race," he told Reuters. "No problem there. That's fully paid. It's just the process in Indonesia with the government."

However, with a number of initiatives in place, including the assistance of local telecomms companies who are raising money through text messaging, and the promise of further money from state-owned oil company Pertamina, which has already contributed just under £4m, Hunnisett is confident Haryanto will see out the season.

"The news in Indonesia is huge, all the ministers support Rio, the media and the public," he insisted. "There's a possibility that Pertamina may come up with some additional funds.

"Formula One is all very new to Indonesia, it will be incredible if Rio didn't finish the season," he admitted. "I'm quite confident he will be there for the year. But in all governments, not just Indonesia, it's never easy or straightforward."

In all honesty, Haryanto has performed better than expected, and for the most part has kept his highly rated teammate, Pascal Wehrlein, honest.