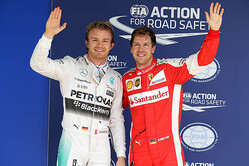 Nico, five poles in a row - quite a statement.
Nico Rosberg: Yeah, of course pleased with today. Best place to be in for tomorrow's race. It worked well in qualifying. I was playing catch-up a little in Quali 2, that didn't quite go to plan, but then Quali 3 really got going and got some good laps in. The last lap was on the edge, there were a couple of big moments in there, but it still worked out to be a good time, so happy with that.

You're in the same position as you were 12 months ago in Brazil, which you then went on to win. How important for you is it to end the season with this kind of momentum?
NR: I'm just thinking about the individual races. I'm here, I want to win and that's it really. Of course, as a side effect, P2 in the championship is there, still to be had, which is better than P3 for sure. And also it's always better to end on a high than a low, for sure, the season, also thinking about next year.

Conversely for you Lewis, no pole now since Monza back in September, which is unusual as a pattern for you. Is that anything you're concerned about at all?
Lewis Hamilton: No.

Can you tell us a little about how today went then?
LH: It was good today, actually. I got a really balance with the car, I was very happy with the work we did with the engineers, the laps were looking quite good, very good through Q1 and Q2 and just Q3, I just wasn't able to find that small bit of edge. I think at the end I didn't maximise the first sector but the other two sectors were OK.

You've never won Brazil, how important a piece of unfinished business is that as far as you're concerned?
LH: Well, my main job is done this year, so it's not the most important thing, but of course that's the target. I've come here, a circuit that I haven't actually won at, so... last year I was strong in the race and I hope to be able to carry that through to tomorrow and try and see if I can make the difference.

Thank you. Coming to you Sebastian, Q2 looked as though you were getting quite close to the Mercedes, only a couple of tenths off, maybe that gave you some hope, but in the end it was around six tenths again - your thoughts on the last hour?
Sebastian Vettel: Yeah, it gave us a bit of hope in Q2 definitely but I saw that Nico had quite a couple of mistakes in his lap in Q2, so I knew that Q3 would be really difficult to get really close. I think in the end we were able to improve the car from yesterday, which is the most important thing, also looking for tomorrow's race. Yeah, no doubt I would have loved to be a bit closer. Nevertheless it's the optimum for us today. Tomorrow could be an interesting one. Yesterday we saw a lot of people sliding, including ourselves, so with the tyres it could be an interesting race.

The other thing we saw yesterday was what looked like reasonably consistent race pace from Ferrari. Do you think it might be enough if either of these two gives you an opportunity?
SV: Well, you should ask them! But we will give everything we have. I think probably on the race pace, looking at the last couple of races, we've always been a bit closer on Saturday. Hopefully we can confirm that again tomorrow and put some pressure on these two guys. If there is a chance then yeah, we'll go for it.

Final thought from you Nico: what do you expect from tomorrow's grand prix. Last year, here, strategy was decisive, but once again you've got the advantage of track position at this stage.
NR: Yeah, it will be an exciting race for sure. Strategy-wise we're quite comfortable because we got all the work on Friday - I'm not sure if that was the case last year - so we know we're in a better position and we know what to expect, that should help. Then of course keeping an eye on Ferrari also, who were quick on Friday in the long run... well, close to us at least. So we need to be careful about that but I think definitely we're going out there for the win.

Nico, it seemed that, particularly sectors one and two seemed to be your strong suit throughout. Why was it in particular that you managed to get those two quite different sectors so right?
NR: I think all sectors were OK - just sector three is a bit more variable because it's just one corner and huge tow influence. So if you happen to have a guy in front it makes a huge different on lap time - so that's why that sector's just more variable. No, all three sectors felt good, I was happy with all of them.

Coming back to you Lewis, picking up on the question I asked you earlier in the unilateral there, you were saying you weren't concerned about qualifying as its gone basically in the last couple of months. Maybe you could just say a little about finding that qualifying rhythm - because you hit the ground running so hard this season, you were just completely dominant in qualifying throughout the year. Is there anything we should read into this last couple of months? Have you missed something, or...?
LH: Not really. I've had the most poles of the year and I've won the World Championship so there's nothing really to read into it. You don't always get it right; you can't always get it perfect every single time, so...

Sebastian, on the theme of qualifying, you've been in front of Mercedes during races and you've been able to stay there this year, so is qualifying pace the number one priority for you and Ferrari to find over this winter period to come back strong in 2016?
SV: Well, I think what you do in qualifying is you try to go as fast as possible, so it's pace in general that we are still lacking - but, y'know, the season is coming to an end slowly. I think generally looking at the last couple of months we managed to get closer. Of course from race to race, from track to track the gap can vary a bit but overall I think things are heading in the right direction. Also, in-season, it is possible to bring updates - everyone is - but difficult to make really, really big changes to the car. So I think next year should give everyone the opportunity to refresh and renew a couple of things and hopefully we can be in a stronger position. But first of all, looking forward to tomorrow. As you said, we managed to get in front and stay there, so the first opportunity could be the start. Let's see, it's a long race here - usually crazy things happen. All eyes on tomorrow and we try our best.