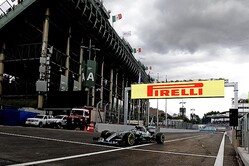 Mercedes driver Nico Rosberg has clinched pole position for the fourth consecutive time, using the P Zero Yellow soft tyre to set a lap of 1m19.480s. It was the 13th Mercedes one-two of the season in qualifying. The high-altitude and thin air characteristics of Mexico City, together with its long pit straight, meant that the highest top speeds were seen in Formula One this year.

Mercedes driver Lewis Hamilton was the only driver to get through Q1 using the medium tyre only, before all the drivers started Q2 on the soft tyre: worth about an extra 1.5 seconds per lap around the Autodromo Hermanos Rodriguez. The only exception was Ferrari's Kimi Raikkonen, who did just one lap on the medium before taking no further part in the session.

With track temperatures falling in the final part of Q3, the first runs on the soft tyre were faster, sealing pole position for Rosberg from Hamilton, with Ferrari's Sebastian Vettel in third. All the drivers in the top 10 utilised their allocation of soft tyres for qualifying and the race, meaning that they will all have used tyres tomorrow.

The strategy calculations are complex here for a variety of reasons: firstly because of the unfamiliarity with the track, and secondly because every session held so far has been run in disparate conditions, with a high degree of track evolution. This means that it has been difficult to get an accurate picture of the way that the tyres behave.

Despite some predictions of rain - which is the case tomorrow as well - conditions remained dry all day, with just a few spots of rain at the end of Q2, while track temperatures remained in excess of 30 degrees during qualifying.

The final free practice session this morning was held in warm conditions, with Rosberg finishing ahead of his team mate by just 0.014s, and 12 drivers covered by just one second.

Paul Hembery: "It was another variable day in Mexico, featuring warm weather as well as some spots of rain - so this range of conditions made it quite difficult for the teams to work out the best tactical choices. We've seen that tyre wear is low on account of the slippery and new surface, but track evolution is still on-going, which has closed the performance gap between the two compounds slightly as more rubber is laid down. There are a few strategy options open: while a one-stopper is entirely possible, a two-stopper might turn out to be quicker, depending on degradation rates, the individual pace of each car and the situation with traffic."

The strategy is a complex one for the Mexican Grand Prix, with weather conditions expected to be at the forefront of calculations for the 71-lap race. As wear rates are low, one stop is possible, but two stops could well be quicker. The fastest two-stop strategy is: start on soft, change to soft again on lap 23, then medium on lap 46. For a one-stop strategy, it makes no difference to the overall time whether you start on soft or medium. Those starting on soft should change to medium on lap 30, while those starting on medium should change to soft on lap 40.

Check out our Saturday gallery, here