Problems for Lotus at Suzuka 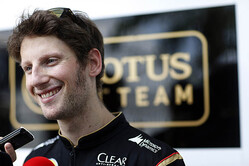 If ever Romain Grosjean needed reminding that perhaps now might be the time to move on, the opening day of the Japanese Grand Prix was it.

His team unable to access its hospitality unit in the paddock at Suzuka, the Frenchman was reduced to holding his usual Thursday press conference outside in the rain.

"The guys are going to do their best as always," said the resilient youngster, who is being linked with Haas. "As long as they catch up by tomorrow I'm happy."

A spokesman for the Enstone outfit, which was effectively given a last minute stay of execution last week when a High Court judge in London deferred the case brought by HMRC until Monday (28 September), insisted, in true 'dog ate my homework' style that the problem was due to the time delay between Japan and Europe and that the relevant payment had been made.

Indeed, the equipment, which included engines, eventually arrived, leaving crew members with an unforgiving programme over the next twenty-four hours.

"This does not mean we can't fight for podiums this weekend," insisted Grosjean, according to Reuters. "Look at Spa, we had bailiffs in the garage and we ended up on the podium. It is a situation which is very tricky. We are waiting for answers and confirmation for the future of the team, but the spirit is still there.

"We are here, things are turning up late but the most important is that our group of people is still here ready to race," he added, a fighting spirit that some teams and their owners would do well to learn from.

"It's when you don't have your hospitality that you actually realise how comfy it is," Grosjean subsequently tweeted.