Chilton has held talks with Haas 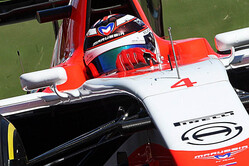 Max Chilton has revealed that he has had talks with 2016 newcomer Haas F1.

Though to be considering three drivers - Esteban Gutierrez, Jean-Eric Vergne and Nico Hulkenberg, last week the US outfit revealed that it is actually considering as many as ten.

Speaking to Sky, Max Chilton, who is currently racing in Indy Lights with Carlin after two seasons of F1 with Marussia, admitted that he has held initial talks with the new team.

"I've definitely put my foot in the door and we've had a few chats," he said. "I think they came out a few weeks ago and said they were talking to ten drivers so I am definitely one of those.

"I'd love the chance," he admitted, "but I have a strong feeling that it is going to be one young Ferrari driver, because it is hugely a Ferrari project - they have Ferrari engines and are using their wind tunnel - and then I hear they want an experienced driver.

"I like to think I am experienced, but if they want a really experienced driver I think there are only a certain number of drivers on that grid," said the Briton, who’s two season in F1 were spent with a Ferrari-powered team. “So I think it will be Hulkenberg, I can't see Jenson going there, but I can't see many other experienced drivers that are free for next year. So I'd like to think I have a chance, but it is probably not going to happen."

As Marussia, re-born following financial collapse as Manor, continues, Chilton concluded: "I would be mad to turn down a Formula One drive, because I have a lot more to prove. I was lucky to do two years but I never really had the chance to show more and hopefully if I did get asked by Manor, they would have a more suitable car for us to perform in."