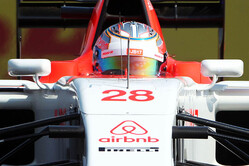 Round 11 of the FIA Formula One World Championship, the 2015 Formula 1 Shell Belgian Grand Prix, marks the conclusion of the sport's annual summer shutdown and the start of part two of the 2015 season.

Will Stevens: "It was nice for me and the rest of the team to have a good long break, but I think we are all ready to get back into the racing now. I had a lot of fun catching up with friends and family, and every now and then you do need a reboot, but at the same time it was important to maintain my physical training regime as this next phase of the season can be quite arduous, particularly the long hauls. I'm feeling really positive about the work that lies ahead, as it will be a combination of maximising our current package for this year and development for 2016. It's good to get that underway at Spa, one of my favourite racetracks and a really great challenge for car and driver."

Roberto Merhi: "It's good to be back after the holidays and to get back to racing here at Spa, which is definitely my favourite circuit. I won my first Formula race here in 2007, in Formula Renault. Not only is it a very demanding circuit, and a real test of skill, but you also have other factors in the mix, like the weather, which can be really tricky as it is very changeable. Prior to the break, I felt that things were really starting to come together for me a little more and I was much more confident with the car. I hope to pick up where I left off and have a really positive second half of the season for me and the team."

John Booth, Team Principal: "It's nice to see the team looking so refreshed after a long and well-deserved summer break. Spa is a great track at which to get the second half of the season started and one where everyone can be reminded of our sport's fantastic heritage. It provides an exciting test of man and machine, and it is great to hear the feedback from the drivers on what is always a very exhilarating lap. Our focus will be extracting as much performance as possible from our current package and at the same time transposing our findings onto the development programme for next year's car."