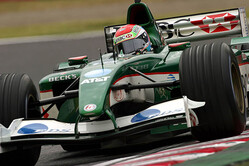 Former F1 driver Justin Wilson is in a coma following a crash during an IndyCar race in Pennsylvania.

The Briton, who raced for Minardi and Jaguar in 2003, scoring a best result of eighth in the United States GP, hit a wall at the Pocono Raceway after being hit by debris - understood to be a nose cone - from a car which had crashed moments earlier.

After F1, which saw the Briton, a former Formula 3000 champion, raise the necessary funding to pay for his drive through a (then) unique scheme which saw fans invest money in his potential career, Wilson headed across the Atlantic, first to Champ Cars, finishing runner-up twice, and subsequently Indy Car.

Along with Sports Cars and Touring Cars, Wilson has also tried Formula E, contesting the Moscow race with Andretti Autosport.

"Wilson is currently in a coma and in a critical condition," read a statement on Indycar.com. "IndyCar sends its thoughts and prayers to Justin, his family, and Andretti Autosport during this difficult time."