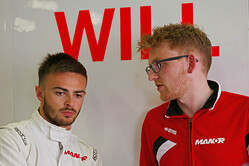 The Manor Marussia F1 Team enjoyed a good qualifying today in preparation for Sunday's 78 lap Monaco Grand Prix. Will Stevens ended the day in 19th position, ahead of his team-mate Roberto Merhi in 20th.

Will Stevens: "It's encouraging to be a little bit closer to the cars ahead, but I think there was a little more to come from the car because our first run was cut short when I had a problem. We managed to get on top of it in between the first and second runs. Overall it was a good session and a very special feeling to take part in my first F1 qualifying here. I'm really looking forward to the race tomorrow and to making the most of any chances to progress through the field."

Roberto Merhi: "It was not a bad qualifying for me. I am a little closer to my team-mate and my runs were good, so I think we can have a good race tomorrow. The chances of being able to keep pace with the cars directly ahead are a little improved by the nature of this track, so that means we can be in a good position to take advantage of any opportunities that may come our way."

John Booth, Team Principal: "Overall, a good first qualifying for Will and Roberto on their Monaco debut. With Will it was not an entirely seamless session, so perhaps there was more to come there. With Roberto, he has had a slightly better session than the races so far, so a good job by him. We will have to see what tomorrow brings but our long run pace has been quite promising all weekend, so we hope to continue our run of two-car finishes as a fitting finale to what has been an emotional return to Monaco for our team."