Sainz to start from pitlane after penalty 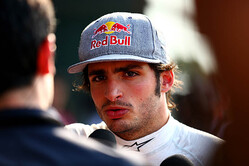 Carlos Sainz will start the Monaco Grand Prix from the pitlane after being penalised by race stewards.

The Spaniard, who qualified eighth, was called before the stewards for failing to stop at the weighbridge during Q1.

Having heard from the driver and his team the stewards determined that Sainz had failed to stop for weighing during Q1 when signalled to do so by the red traffic light, the car was not returned to the FIA garage and work was undertaken, a breach of Article 26.1 of the FIA Formula One Sporting Regulations.

In accordance with Article 26.1 (iv) of the FIA Formula One Sporting regulations Sainz is required to start from the pit lane.

To add insult to injury, his team was also fined 400 euros when Sainz was caught speeding in the pitlane in Q2, a breach of Article 30.12 of the FIA Formula One Sporting Regulations.