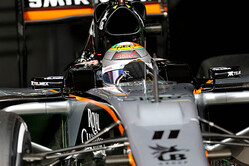 Sergio Perez: "We raced very hard today, but in the end it wasn't quite enough to come away with some points. With the strategy we looked at all the opportunities and switched to three stops quite early in the race, which was the right decision. I was able to push hard all the time with the aggressive strategy and fight with the cars ahead of me. In the final part of the race I was catching Ericsson, but he was just too far ahead to make up the ground. We are still not where we want to be in terms of competitiveness, but there are definitely some positives to take because we made an improvement compared to our performance in Malaysia."

Nico Hulkenberg: "It is disappointing to end the race early, especially considering our previous record of solid reliability. It would have been interesting to see how our race would have developed because I made some good progress on the opening lap when I went around the outside of a few cars and then got a good run at Kvyat, which put me up in P12. We had the pace to keep up with the Toro Rossos and Saubers, so it was positive to see our pace being more competitive. It is still too early to say what caused my retirement: the engineers are looking at the issue and still investigating. All we know at this stage is that I lost drive and had to park the car."

Robert Fernley, Deputy Team Principal: "We leave China with mixed feelings after a busy race. Sergio performed really well and was unlucky not to see his performance rewarded with a point. He was in a number of battles and was able to compete on more or less an equal footing with some of our direct rivals, which offers an encouraging view for the coming races. It was a shame to lose Nico due to a technical issue, especially as he had made very good progress in the first part of the race. Like Sergio, he was showing some really good pace and it would have been interesting to see where he would have finished had he continued. Throughout the weekend, there have been some encouraging signs regarding our performance and we can build on these as the development of the VJM08 continues."