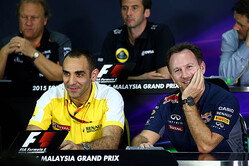 Paul, can I start with you, what did we see today in practice with these extreme temperatures - up to 60 degrees this afternoon - what's it going to mean for the racing this weekend?
Paul Hembery: Well, of course here it depends on what the weather brings along, that's one of the big variables for everybody. But the hottest conditions we've seen for some time, hotter than anything we saw last year. The medium tyre in particular was overheating. About second, eight tenths to a second different maybe between the two compounds. If it was like this on Sunday that would lead us to certainly a three-stop race we think, which would be good after maybe a few too many one-stops in recent times. So it's tough conditions but we didn't see any levels of blistering that would have caused any concern. We had a little bit of graining this morning but the track evolves here quite quickly, so relatively straightforward for us.

Well you mentioned one-stops, we saw that in Melbourne last time out. The tyres, apparently, are more consistent but also a little bit, perhaps, more conservative. So without these higher temperatures, like this weekend, is one stop going to be more or less the default for the season or are you hoping to see more stops as we go on.
PH: Well the input has always been two to three in reality and that's what we'll be aiming to do. We're understanding now the evolutions of the cars this year and as we gain more confidence as to where they all are then of course we can make choices that will make sure that we're closer to the two and three stops rather than the one.

Franz, coming to you, obviously two exciting rookies in your cars this season, both had solid weekends at the opening round in Australia. What are you seeing that these two have got when you look at the data?
Franz Tost: I've seen that they are matured to do Formula One. They are very highly skilled and we prepared them quite well during the winter months and in Melbourne and so far they have really done a fantastic job. Also today I must say that both drivers competed quite well and I expect that if we get everything together both of them tomorrow will be within the first ten.

There were some quotes since the last grand prix from Dr Marko of Red Bull about a possible sale of Toro Rosso to Renault. As the team principal of the team what's your view on that or do you have any comment on that?
FT: I think this would be a fantastic opportunity for Toro Rosso to make the next step forward, because the team wants to be established in the future within the first five in the constructors' championship and to be part of a manufacturer, to work together with a manufacturer, to be owned by a manufacturer would be exactly this step forward which the team needs to be established in the first five.

Cyril, coming to you then, from a Renault points of view how far along are you in that consideration of acquiring a team like Toro Rosso and how would that fit in with a plan of working with Red Bull?
Cyril Abiteboul: I think the first priority is to get the engine right. We've seen in Melbourne that it was not really the start of season that we were expecting, both on track and off track, so before starting really to think about doing a car I think we need to get the engine under control, so that's the priority for the time being. Then if we can do that we'll have to review the situation from a marketing and strategic perspective and see if there is anything better to do than we are doing currently, from more of Formula One to less of Formula One, but for the time being we are focused on what we are doing.

Now it's no secret that there have been quite a few quotes from you since the Australian Grand Prix about the problems with Red Bull's competitiveness not being just about the power unit. Can you elaborate on that?
CA: What I can elaborate is that Melbourne was a big disappointment for the whole team and when I say the whole team it's Red Bull, Renault and it's Toro Rosso, so those two guys and myself were all extremely disappointed. I'm sure also extremely frustrated because of the amount of work and the level of expectation for this season when we are all very keen to reduce the gap to Mercedes. Everyone has his own challenge and agenda and we were not where we wanted to be. So I think this has created a lot of frustration and maybe led to some comments that were unjustified on both sides. But I think we need to move on and focus on making progress.

Christian, what's your view on the points that Cyril has just raised?
Christian Horner: Well, first of all I think he's very brave to be sitting there between Toro Rosso and Red Bull. Look, I think that what happened in Melbourne happened. It was a frustrating weekend. We're all racers at the end of the day; we all want to do the best that we can. Melbourne from start to finish didn't go in any way to plan. I think that's what's encouraging is the way that the two teams have reacted between Melbourne and here and the positive steps that have been made, and we're experiencing some of those steps on track today. It's always a difficult situation particularly when you're race team with an engine supplier and I think that the way the two teams have worked in the time available has been very commendable.

So what's the best way forward for Red Bull Racing? And what are your thoughts also on what Franz has been saying about Renault's possible takeover of Toro Rosso?
CH: Well, it sounds like Franz wants to sell his team to Cyril and we then need an engine. We've enjoyed a great deal of success with the Renault/Nissan alliance over the last five or six years - 50 grands prix have been won, eight world championships, four drivers' and four constructors' - all with Renault power. There are some very capable people within Viry but I think that we've seen this year, well not this year, really from last year that Mercedes have set the benchmark at an extremely high level. That's not their fault, they've an incredibly good job and it's down to the rest of us to work hard to try to catch up and I think the frustration more than anything coming into the first race was that expectations were higher than what we saw in Melbourne and we appear to have taken a retrograde step. But I think having researched properly into those issues, Renault have really started to understand them now and already we've seen here a positive step forward.

Robert, a delayed start to testing for you and Force India and the new car, so in light of that how satisfied were you with the points scored in Melbourne in the opening round?
Robert Fernley: I think Melbourne for us was an unexpected but very pleasurable finish because the team has worked exceptionally hard over the winter and it's very nice to be able to go back with points in the first race and a very credible finish. So I think that was excellent but we've still got a lot of work to do.

What lies ahead for the rest of the season for Force India, especially as it seems that Toro Rosso, Lotus and Sauber are all stronger this year than last year?
RF: I think what we've got to look at is where Force India was at the end of last year and we had a choice to make between staying with our own wind tunnel in Brackley, which is a relatively old tunnel with a 50 per cent model, or restructuring the whole aero department and moving forward. Fortunately for us we've got Vijay there to support the team and he made the decision that we would move forward and we've restructured the aero. We're now working exclusively in Cologne with the Toyota wind tunnel, we've upgraded the CFD. Unfortunately in that process there's a slight step backwards and I don't think we will see really Force India coming to the front again until probably mid-season.