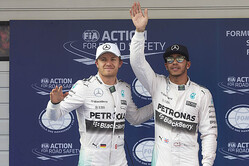 Lewis took his third straight pole position of the 2015 season and the 41st of his F1 career. Nico qualified just 0.04s behind Lewis - the second all-Mercedes front row of 2015. Both drivers ran once in Q1 (prime) and Q2 (option) before two option tyre runs in Q3.

Lewis Hamilton: China continues to be a good place for me; I guess the circuit fits my style more than others and I enjoy driving it. Also, you just have to look at the stands with all the banners to see how amazing the support we have here is every year. The car felt really good today and the guys back at the factories have done a great job since Malaysia to analyse where we could improve and make a step forward. The last race wasn't the tidiest but this weekend we've put it all together with no problems so far, so thank you to everyone for that. Let's hope it continues tomorrow. There's a long race ahead and the Ferraris are very quick once again here, so the job is far from done.

Nico Rosberg: I'm frustrated with today's result because four hundredths of a second is nothing. I had a good lap at the end but, in hindsight, it's always possible to see where you could have found that little bit extra. But that's the situation for me now and I'm still confident for tomorrow. I've focused on race pace with my set up and I know that tyres will be the decisive factor tomorrow. So I will be aiming to put a lot of pressure on Lewis ahead of me.

Toto Wolff: That was a brilliantly close qualifying session between our two boys. Nico pulled out a fantastic lap on the final run but Lewis had just done enough with his first set of tyres to take pole by four hundredths of a second. It's a good situation to be in and confirms what we saw yesterday - namely that we have an advantage over Ferrari on one lap. But we also know that the gaps shrink in race conditions and we saw in Malaysia that they could extend their tyre life beyond what we could achieve, so we need to be careful of that tomorrow. We have some new factors to consider in our pre-race thinking compared to two weeks ago, so a successful race will be all about finding the right balance between speed and tyre management.

Paddy Lowe: That was a very dramatic qualifying session, with both of our drivers on the front row and split by just four hundredths of a second. It's a great result for the team, especially as we brought a number of upgrades this weekend which helped us today, so thank you to everybody back at our bases for all the effort they put into delivering that. It was great to see Lewis and Nico performing at their best and interesting to note that, behind us, the Williams managed to split the Ferraris today. The other noteworthy fact was that we managed to negotiate Q1 using just one set of prime tyres, which was not an easy prospect given a performance difference of up to two seconds between the compounds. But two very good laps on the prime tyre mean we have saved new options for the race. We start tomorrow in a great position but we will need to manage our race well and find the best tyre strategy. Our competitors have strong pace and we will have our work cut out tomorrow.