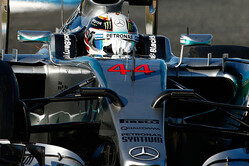 Mixed bag for Mercedes AMG Petronas on a hot and humid opening day at the Sepang International Circuit. Nico topped the times during the morning session, with Lewis claiming top spot in the afternoon. A failure on the Power Unit inlet system of his F1 W06 Hybrid brought Lewis to a halt on track after just four laps of the opening session. Fantastic work by the team ensured Lewis returned to the track for the final hour of running in the afternoon. Both drivers used the hard compound tyre only during the first session, the medium and hard in the second; setting their fastest time of the day on the medium.

Lewis Hamilton: It was an amazing job by the guys to get me back out this afternoon - particularly here in such tough conditions, so I'm very grateful to them. It's not an easy track and the temperatures also make it difficult with the tyres, so it never helps to lose such a big chunk of a session. But fortunately I got a few laps in at the end on a longer stint. In terms of setup I didn't have time to make any changes - I just went with what we brought over from the last race. It's probably quite a bit off where I'll eventually want it so there's definitely improvements to be made. We'll need to work hard too as Ferrari looked great out there. It will be interesting to see what happens tomorrow.

Nico Rosberg: I had a good morning session but I didn't get it right with the option tyres in the afternoon, so I need to find out why that was. In general it was a difficult day for the team as we had reliability issues on Lewis' car and which meant he missed a session. The conditions are really crazy out there. It's so hot, the temperatures are really unbelievable. So us drivers and the cars have to adapt to that which is a big challenge. We also learned that Ferrari is strong again so it will be an interesting weekend.

Toto Wolff: A mixed day for us. Nico had a difficult stint on the medium tyres with a lack of grip and his longer run was tricky too. Lewis lost track time with the engine problem, so it's another reminder for us to keep our feet on the ground and keep working. In this business, winning and losing is decided by fine margins. The team and Lewis did a great job to recover, so we could collect some good data with both cars. Now we need to analyse the performance, ensure reliability and make good choices for tomorrow and Sunday.

Paddy Lowe: Not an easy day. On Lewis' car we had a failure of the inlet system on the Power Unit. We also had a problem with the telemetry on his car that wasn't solved until just before the end of P2. This made managing the issue on his car doubly difficult - but the team did a fantastic job to repair the car. Nico had a less troublesome day - running through his programme smoothly. We have a lot of work to do overnight to improve the setup of the cars and understand the issues we had and fix them for the race.