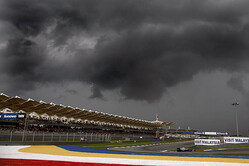 Officials are considering rescheduling the start time of the Malaysian Grand Prix in the wake of Jules Bianchi's crash at Suzuka.

In 2014 the race got underway at 16:00 however, this year officials are considering moving the start time forward to 15:00 in an attempt to avoid the downpours that usually occur later in the day and have disrupted the event over the years, most notably in 2009 when the race was stopped after 33 of the scheduled 56 laps due to the treacherous conditions. By the time conditions finally began to improve the light was fading and it was decided to classify the results as of the end of lap 31 and award half-points.

Mindful of this, and Jules Bianchi's accident at Suzuka, which took place in similar conditions, Sepang boss Razlan Razali has admitted that the idea of moving the race start time forward is under consideration.

"Mr Ecclestone mentioned that because of the Suzuka incident the FIA has some time limit," he told Reuters. "So he is reviewing to move the start to the original time, maybe this year.

"For us it's good," he admitted. "It's a safer time bracket, now people can come in for lunch, watch the race and about five o'clock they can go back home. He mentioned the possibility (of an earlier start). We said if you want to go back to 15:00 we fully support it."

Razali also revealed that plans to run the Sepang event at night have also been shelved.

"It's a danger to force us to do it," he said. In the past he (Ecclestone) was pushing but now I think it's the first time where he actually listened to us as a promoter what we want. At the moment we don't want it. Every circuit has its own identity, the danger is to copy someone else."

This year sees the seventeenth running of the event, but it is already being overshadowed by the night race in Singapore, which has only been held seven times thus far.

"They have an edge because they are in the city and it looks really nice on TV," said Razali, "it's cooler but I still think Sepang offers better racing."

In London for talks with Ecclestone aimed at extending the contract which ends this year, Razali admits that despite initial fears concerning the new formula it is proving popular.

"We were concerned after the feedback from Australia. Very concerned. When it finally came to Malaysia, I didn't like it. It was simply too quiet," he said. "But what I noticed in the grandstands is that you get families with kids watching and enjoying Formula One better.

"I can remember in the past where a dad would put headphones on the kid and hold it. Or a kid would be too scared and start crying, wanting to go home. I think it attracts a new breed of fan base now. And that's what you want."