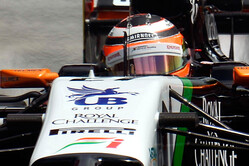 Force India has announced that it will use the wind tunnel facilities of Toyota Motorsport in Cologne as its nominated site for all aerodynamic testing in 2015 and beyond.

Force India's own wind tunnel facilities in Brackley however will remain operational and available for external customers.

"The decision to use Toyota's facility in Cologne is indicative of our ambitions to continue as a competitive force in Formula One," said Vijay Mallya. "It's one of the most significant decisions in our history and gives us access to what is regarded as one of the finest wind tunnels in the world. We have used the facility previously on an ad hoc basis and we are aware of the advantages of basing all our aerodynamic research in Cologne. It will strengthen our approach and give us a solid base to build upon for the years to come."

Today's confirmation from the team backs up reports that its 2015 car has been developed at the Toyota facility, the state-of-the-art wind tunnel in Cologne having been used by a number of F1 teams most notably Ferrari and McLaren.

From 2015, as part of the cost cutting measures (don't laugh), teams are restricted to one nominated wind tunnel, Force India has made its choice.