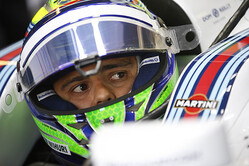 Felipe Massa finished second and Valtteri Bottas third in the final Grand Prix of the season in Abu Dhabi.

After a difficult start for Valtteri he fought his way back through the field whilst Felipe maintained position in third. Felipe managed his tyres well in every stint and after overtaking Nico Rosberg began closing the gap to leader Hamilton. The team's first double podium finish since 2005 secured third in the Constructors' Championship with Valtteri fourth and Felipe seventh in the Drivers' Championship.

Claire Williams, Deputy Team Principal: I am exceptionally proud of the team today, to go from P9 last year to P3 in 2014 is amazing. The work to turn the team around has been hard, but I am so happy to see the smiles back on the faces of the people that work here. This is just the first step in a great future for Williams. We must congratulate Mercedes on winning both Championships and thank Mercedes HPP for all their effort throughout the season.

Rob Smedley, Head of Performance Engineering: It was a fitting end to the season. The team has come on over the year in an incredible fashion. To get our best result of the season in the final race is a fitting tribute to all the work we have done. It's been over ten years since Williams was last P3 in the Constructors' and that is testament to the effort that the guys have made, many of whom have been here through the tough times are now reaping the benefit of their commitment.

Felipe Massa: It was a close race, I didn't think the victory was there, but it was so close at the end. It was good to be racing and pushing the Mercedes. I hope this is a strong building block to go on for next year. The team progressed so much throughout the year, which is why we were able to get podiums in the second half of the season; we will continue this forward movement into next year.

Valtteri Bottas: We were very competitive today. I got a bad start and the race was compromised after I was stuck behind a few cars, so to walk away with a podium is incredible. It was a good race; I could really push and fight. The team has grown and developed throughout the season, from our first race in Melbourne to our best result here. It's a great start to build on for next year and to continue the team's great history.