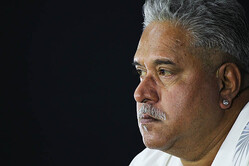 Let's look back on the race in Russia - what did you think of the event?
Vijay Mallya: "It's a very nice track. It looked very impressive on television and the drivers seemed to like it. I think the organisers did a fantastic job and I would rate it as one of the best new tracks we've seen. Turn Three, in particular, stands out as one of the great corners in Formula One."

The team is now sixth in the championship with three races to go...
VM: "It's been a ding-dong battle all season. Fifth place is not that far ahead so it's certainly not out of reach. As I said before Russia, we're not giving up, whether it's Austin, Sao Paulo, or Abu Dhabi we'll give it everything we have! The final races of the season traditionally can deliver surprises and we must be ready to take any opportunity that comes up."

Did you enjoy the race in Austin?
VM: "It's a lovely race in a fantastic city. The USA has a long history in Formula One and it seems Austin as a city has continued the tradition of embracing the United States Grand Prix. The grandstands are full, the supporters are passionate and knowledgeable, and there is a party atmosphere in town for the whole week. It's one of my favourite events in the calendar."

Nico Hulkenberg: "I remember that as soon as I drove in Austin my first thought was that it was an amazing circuit. It's fun to drive, with lots of different kinds of corners, and it's one of the best tracks from the new generation of circuits. It's very easy to find a rhythm and the tarmac is very smooth, which makes it very nice to drive. Away from the track, Austin is a venue everybody enjoys visiting. It's not the biggest city, but there is a good atmosphere and they love Formula One."

"I've had good results in Austin [P8 in 2012 and P6 in 2013] so I am feeling upbeat about this weekend. It's clear that some teams ahead of us have made a step forward recently, but we know that we can race well. I think it's realistic to target points again this weekend and try to close the gap to fifth place."

Sergio Perez: "Austin is a great race and because it's so close to Mexico it feels like my ‘home' race. There are usually a lot of Mexican fans and you feel a lot of support because the grandstands are full and there are always a lot of Mexican flags. I enjoy the track, especially the first sector and the uphill turn one, which is quite unusual. You can brake extremely late for this corner and it's a good overtaking opportunity. From there you go into the quick corners: turns three, four and five, which are a lot of fun to drive."

"I arrive in Austin feeling positive. I've scored points in every race since the summer break - five races in a row - and I think we've maximised what we could get out of those races. We've been racing hard, taking some chances, and making some excellent decisions with the strategy so hopefully we can continue to do so in the next few races."