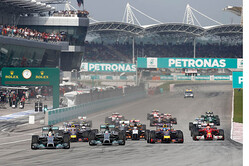 The potential for teams to enter a third car has reared its head once more, this time with the suggestion that some teams could feature an extra car as soon as next season.

Over the Italian Grand Prix weekend former Williams CEO Adam Parr tweeted that 2014 was "the last year of F1 as we know it. In 2015 eight teams will contest the championship, with several teams entering three cars."

It was a suggestion denied by McLaren's Racing Director, Eric Boullier, who admitted that while it has been a topic of conversation he does not think a third car for some teams is the immediate answer to the (financial) pressure being applied at the bottom end of the pitlane.

"There is, as usual, a lot of discussion around the situation which is not comfortable for some teams," Boullier explained. "I obviously hope that there would be some understanding and some development in the business model of F1 in the near future to not go that far and not be that provocative."

The push for three car teams is not new, Ferrari has long advocated the move as a way of mitigating dwindling car numbers, but this current suggestion seems directed at something more deeply seated.

Both Caterham and Sauber have uncertain futures. While Canadian billionaire Lawrence Stroll has been linked with a move for the Swiss team there remain question marks over it, as there do the new owners at Caterham. With only eleven teams on the grid now, the loss of one or both would have a major impact.

When contacted by Pitpass, Parr would not be drawn further on his tweet, though we can clearly read into Boullier's response.

"Formula One is going through a transition," he said. "In the last decade budget has literally gone through the roof and now we are in a different economic situation.

"There are potentially a couple of teams that may suffer from this, and I don't know if they will be still on the grid."

The problem is that this period of economic strife has been ever present. Outside of the top few teams, where money is no issue, most have been barely scraping by. But such is the nature of Formula One – those at the top have typically flowered while those at the bottom tend to dwindle. Forti, Larousse, Brabham, Ligier and a litany of others have all fallen by the wayside.

The difference now is, with effectively a franchise system preventing new teams from easily entering the sport, and commercial self-interests putting teams at odds with any relaxation of entry requirements, there is no simple way to keep grid numbers at a sustainable level.

While Boullier rejected the notion of three car teams his reaction gave one the impression that it is far from the most radical proposal to have been tabled.