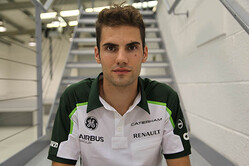 The young Italian is currently in his second season of Auto GP and is lying fourth the in 2014 championship which he is contesting with Eurotech Engineering with 131 points after the last round at the Red Bull Ring in Austria.

According to the team: "He joins the previously announced Nathanael Berthon in the program which gives up and coming drivers the opportunity to embed themselves in the F1 team’s operations at Leafield Technical Centre and on track, and to gain valuable experience of working with F1 engineers and current season F1 technology in a virtual environment in the team’s driver-in-the-loop simulator."

In 2013 he contested 8 rounds of the GP2 Series with Venezuela GP Lazarus, his best result coming in Malaysia where he finished 10th in the Sprint Race. After the Monaco round he made the move to Auto GP.