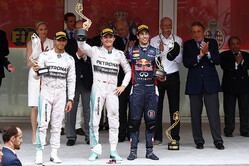 Nico, congratulations, man - a home win for the home boy. How did it feel? You had Lewis very, very close to you all the race but you held on to your lead. How was it?
Nico Rosberg: A very, very special day for sure. Lewis drove really, really well and pushed me massively hard, so the pressure was on all the way. But I kept it cool and, yeah, was able to win, in the end pulling a bit of a gap because I had the fresher tyres. So, fantastic and I'm very, very happy for the whole team, it's an amazing car they've built and given us this year.

Congratulations, well done to the Monaco boy. Lewis, how are you? Tell us a little bit about what happened on the 56th lap? You got something in your eye?
Lewis Hamilton: Yeah, just through the visor… but anyway that's not important. It was a good day and really good for the team to get a one-two.

You had [Daniel Ricciardo] right close behind. How was it? You started second and finished second and how are things with your team-mate, I think people want to know?
LH: I had great pace, you know, obviously I felt I was very strong today but it's a very, very difficult circuit to overtake on…

It's incredibly thrilling to watch, you were all incredible out there, the closeness of the cars…
LH: Thank you. Fortunately we didn't make any mistakes, so….

Daniel, well done, man. Nice to meet you; Benedict. Tell us a little bit about your race. You were in third for a while, then the pit stops, tell us a little about your strategy.
Daniel Ricciardo: Firstly, it's really nice to be up here on the podium in Monaco.

It's your first podium here isn't it? Congratulations.
DR: Yeah, thank you. The start was not great, I dropped back to fifth actually. A bit of frustration but then we saw Vettel had a problem, so we were able to get fourth and then we saw Raikkonen had a puncture on one of the safety cars. So we sort of inherited third after a poor start…

You got very close to Lewis. You were right on his gearbox at the end?
DR: At the end we really closed in. I believe he had an issue. We tried to put some pressure on but in the end third was the best we could do.

Congratulations Nico - a two-time Monaco Grand Prix winner, only a handful of drivers have ever done that before. Fifth consecutive one-two finish for the Mercedes team and you are back on top of the Drivers' standings. Can you sum up what this win means for you today in the context of tyhe4 battle with Lewis for the championship?
NR: Yeah, it's a special win, definitely, because Lewis has had the momentum with the results and everything and I really needed to try to break that momentum and somewhat I managed to do that this weekend. Of course taking the leading again in the world championship and winning here in Monaco, yeah, all in all really, really cool.

Well done. Lewis, obviously the momentum is broken for the moment. We heard you on the radio quite a lot after the safety car and the pit stops, questioning and speaking about the strategy calls. Obviously you pitted together under the safety car. Had there been a thought that you might try to undercut Nico before that? Can you explain to us what the conversation was about?
LH: I don't remember to be honest. I don't. I think they saw a crash and normally under the crash we could have come in and I really should have come in but the team didn't call us in. We really should have pitted that lap.

Fair enough. Daniel, your first Monaco podium. Can you describe your feelings about that and looking back across qualifying and the race is there any way you could have got a better result than the one you got today.
DR: To describe the feeling, it's really nice to be up here. Could we have done better? I don't know. I felt yesterday that we left a little bit of lap time on there. Where that would have jumped on the grid, who knows. After that, the race itself - the start was not good, not what I wanted. I actually dropped back to fifth and then Seb had his problems, still not sure what, but pretty evident he had problems when he slowed on the straight. Then Raikkonen I saw got a puncture under the safety car, so I got third and then pretty much was just trying to maintain the gap behind me to Alonso. Then when I thought there was enough or the right amount of laps left before the end to push and not really save tyres anymore, I did and went for it. We got close to at least one of the Mercedes at the end but you know what it's like around here, it's quite hard to pass. Tried to put a bit of pressure on but third was the best we could do but not a bad day.