A vision of the future - the driverless race car

In the wake of Imola 1994, for many the first experience, courtesy of their TV sets, just how brutal and unforgiving Formula One can be, the sport went into overdrive in its efforts to ensure that such tragedy could never happen again.

Though the powers that be can quite rightly point to the positives, the number of drivers who have survived far worse accidents and walked away, there were also some quite silly kneejerk reactions such was the desire to convince the wider public that F1 was safe and Imola was merely an aberration.

Such was the safety drive some opined that they remembered when "motor racing was dangerous and sex was safe...", the purists almost lamenting the dreadful days of the 50s, 60s and 70s when we were losing our heroes almost on a weekly basis.

As the cars became safer so too did the circuits, and as standard parts were introduced - more about money rather than safety to be honest - some claimed it was only a matter of time before drivers - in the name of safety - operated their cars by remote control.

At a time when the majority of Formula One testing is done in simulators and race drivers are entering the sport having gained their experience in racing games, the lines are becoming ever more blurred.

Now, Canadian industrial designer and entrepreneur Charles Bombardier, grandson of Joseph-Armand Bombardier, founder of Bombardier Inc. and inventor of the snowmobile, and whose previous projects include an all-terrain vehicle and ground effect cargo plane, has turned his attention to racing. 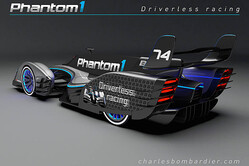 "The Phantom 1 is a concept for a new era of motor sports, where full-scale driverless race cars powered by electric motors (or combustion engine) are driven remotely by gamers or by Racing Artificial intelligence (AI).

"I've been thinking about driverless race cars for some time," says Bombardier. "I enjoy driving fast cars and follow racing for both the sport and the technology. However, as an engineer, I have also been thinking of a scenario where the pilot's life would not be in danger, yet the spectacle would remain the same.

"I am not proposing something to compete against traditional racing," he stresses, "rather a scenario that would complement the status quo .My scenario would be a driverless racing series where some cars would be remotely controlled by the best drivers in the world - think video game gods. In another category, Phantom 1 would be controlled by Racing Artificial Intelligence.

"The Phantom 1's body mixes Formula 1 and Le Mans prototypes to achieve an optimal aerodynamic efficiency," he continues. "The body could be very lean and low, and it would have enough space for efficient Lithium-Air battery packs. The weight target would be 1,250 pounds. The rear wheels would be covered, and the front and rear spoilers would adjust to adapt the aerodynamics of the car in real time. It would tilt up when braking, and tilt down when overtaking and going on straightaways.

"There would be two large LCD screen panels on each side of the car to showcase sponsors and rotate ads on the fly based on the target audience. Animated sponsor logos and motion graphics would be projected on them and also on the covered part where the driver used to be. LED stripes would be used on some body parts to make car look more aggressive and visually appealing. They could also change based on the car's racing strategy or technical condition.

"Much of the challenge to engineers creating F1 and Le Mans prototypes is the issue of driver safety. Being driverless, Phantom 1 would allow engineers to focus on outright technical performance without the same restrictions. This should allow for more rapid engineering and AI development.

"The Phantom 1 concept would let us push the cars to their limits without endangering the drivers. I would create an annual online competition open to everyone... the championship would be open to anybody with a computer. More exposure means more interest. I would also create races with no remote drivers, meaning an AI would drive the cars. This would improve the technology used in our cars, and it would translate into incredible competition between rivalling AI's."