Whiting and Honda man line up for China press conference 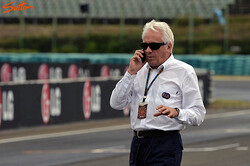 In a rare move, Charlie Whiting will participate in this Friday's technical press conference in Shanghai.

Whiting, whose last press conference was just ahead of the season opening Grand Prix in Melbourne, at which time he attempted to clarify the existing rules whilst introducing a few new ones, comes at a time when debate over the 2014 regulations still rages.

Such is Ferrari's desperation, the Maranello outfit, having made little impact with its poll, in which 83% of those that took part expressed the view that they don't like the 2014 regulations - which in turn corresponds with a Pitpass poll in which 81% of those that voted said the Italian team's unhappiness with the regulations was down to "sour grapes" - has taken to quoting the president of the Italian Olympic Committee, Giovanni Malago, who, by amazing coincidence, is also unhappy with the new regulations.

"I speak on behalf of Italian sports people and fans, I don’t like this Formula 1 and in my opinion it’s delivered a product that has absolutely no sense," he declared. "In my opinion, it’s a form of self-harm. I hope the people who run the sport look again at the rules because the way Formula 1 is now, it has much less appeal and that’s a shame as it is an extraordinary world."

Ignoring the manner in which the original Olympic ideal has been wholly sacrificed in the name of mammon, as we await similar views from the presidents of the Austrian and French Olympic Committees, Whiting is also certain to be asked about reports that the sport could witness a return to active suspension in a bid to limit costs especially as it has been suggested that the system - like so many others these days - would be an FIA standard issue.

Other suggestions being put before the Strategy Group as the sport include further reducing the number of gearboxes available, simplification of the front wings (yawn), lengthening curfews and further reducing staff numbers taken to races.

All this as the majority of teams attempt to balance the books following the last round of changes.