Ferrari is to Formula One is like what Ant is to Dec or fish is to chips, you can't have one without the other. Being the only team to have competed in every World Championship since the Formula's inception the team remain the most recognisable brand on the grid, therefore the Ferrari car launch is always a defining moment for the season ahead. For the first time the team allowed the fans to chose the cars designation via an online vote with F166 Turbo being pipped at the post by F14T which as many have noted strongly resembles another of the manufacturers companies: FIAT.

Ferrari have been preparing for the challenges faced by the 2014 regulations for quite some time and with good cause, as they not only have to produce their own car but design and then resell a powerunit (Supplying Sauber and Marussia). Whilst previous seasons have seen success for the scarlet team their ultimate goal of being crowned World Champion has eluded them since 2007. Kimi Räikkönen returns to the Scuderia after a 4 year absence in a partnership that allies him with double World Champion of 2005/2006 Fernando Alonso. Their partnership promises to be an interesting alliance with both drivers striving to increase their World title tally but also return Ferrari to the top too.

Ferrari have also been busy in their assault on reclaiming the top spot, refurbishing their on site Wind Tunnel facilities at Maranello following correlation issues when using Toyota's facilities in Cologne. This along with streamlining their approach and processes has been backed up with the hiring of personnel along with the marquee signing of James Allison from Lotus last season. James worked at Maranello during the glory days in the early 2000's and so knows only too well the pressure involved with working at Ferrari.

From the outset I'd say that the F14T's Front Wing seems relatively simple and on that basis we clearly aren't being shown the item that will adorn the car in the coming months. The placeholder shown however does look a little wide from the frontal shot but will of course be 150mm narrower (75mm either side) when it hits the track in a few days time. An evolution of the F138's Front Wing it features 3 individual flaps (inc the Mainplane) whilst the upper flap (which also has a Gurney Tab on the outer portion) has been split into 2 sections like it's predecessor this perpetuates a 4 tier arrangement, significantly less than the 7 tier one that preceded it.

The Cascade sitting above the Mainplane seems to be a relatively primative design but is angled in an outwash direction (like the Wing itself) and includes a steeply angled upper section. The Endplate has been carefully constructed to allow airflow from the footplate side of the wing to pass in and under the Wing in a move undoubtedly designed to help the car in Yaw.

The Endplate is essentially the most forward element
(outlined in yellow) whilst the rearward section is formed by the upper flap curving over to meet the footplate (a trick employed by Sauber in the past, in green) 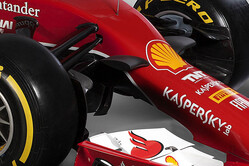 In the image showing the wing from above and the screen cap from the launch video on the left we can see that the triangular vane that protrudes along the top of the Endplate also features a slot (looks like a 'Toaster Rack') This slot will undoubtedly be compared to the one used on the overhanging vane used by Lotus on the E21 last season due to the James Allison connection. Airflow gathered along the top of the footplate that doesn't flow inbound assisting the flaps will be ejected out the top of the slot aiding in turning the airflow around the front tyre.

The Wings angle adjuster has also been angled to promote the outwash of airflow around the front tyre.

Also visible in the image above is the under chassis turning vanes which at first glance seem similar to those seen on the F138 but after closer inspection I'd suggest they are more closely aligned to those run on last years McLaren the MP4-28. The most forward element seems to be attached to the nosecone whilst the rear section of Turning Vane is mounted under the chassis.