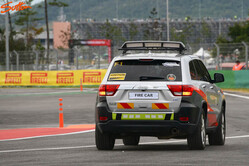 There has been lots of talk about changes for the coming Formula One season, some we already know, like V6 turbo engines, and some that are still uncertain, like the recent proposal that the last race of the season will offer double points.

Wanting to get to the bottom of things, I made some calls, sent some emails, posted coded messages on Facebook and Twitter, and at last, I was contacted by a special source who assured me that the following information was absolutely factual. My source for this material insists on his name being made public, so I hereby thank Nigel Snowden for the following regarding the upcoming season.

Pirelli will bring four different dry tyre compounds to each race, supersoft, soft, medium, and hard. The teams will be required to use all four during the race, and for one stint of at least 10 laps, each team will be required to mix the four compounds, the assignment of which compound goes on which corner of the car determined by a pre-race lottery on the starting grid, conducted by Bernie Ecclestone.

DRS zones will change throughout the race, in a completely random manner, controlled by the stewards in race control. A small green light on the steering wheel will come on to let the driver know when he can open his flap.

At the conclusion of each race, the podium finishers will, prior to the awards ceremony, conduct a game of rock, paper, scissors to determine the winner. The second and third place drivers will compete first, with the loser taking third place points. The winner of the first match will face the race winner to determine who actually gets the winner's points for the race.

There will be special "home race" considerations for lead drivers at each of the "competitive" teams. For example, Fernando Alonso will be guaranteed pole position in Spain, regardless of his actual time. This will apply for Massa in Brazil as well, Vettel and Rosberg will cut cards for it in Germany, as will Button and Hamilton in Britain.

Not only will there be double points offered for the last race of the season, but there will be triple points awarded at Monaco, and quadruple points in the USA at the Circuit of the Americas... since everything is bigger in Texas.

In order to spice up boring races, sprinkler systems will be installed at key corners of each circuit, to be activated if gaps grow too large. The water will come on and go off with no warning, to keep the fans entertained.

There will be a "mystery" race on the calendar, the location of which only to be known when the transport planes and charters land. Only the pilots of the planes will know in advance where they are going. Since only VIP's need to see the races in person, from the safe remove of their luxury boxes, there will be no need to sell tickets to 'regular fans'. No TV announcers will be allowed to attend, and will have to do their commentary from their home studio, as is done at every race on NBC Sports in the US. There will be a special prize awarded to the first commentator to guess the location of the race.

There will also be a new bonus point system for Constructors, to try to bring more excitement to that Championship as well. Bonus points for having both cars finish in consecutive positions, most confusing press releases, best food served to journos, best media goodie bags, etc. All of which should keep even Marussia and Caterham interested, and, hopefully, interesting.

With all of these exciting innovations, 2014 should certainly be a season to remember. Or maybe not.

Learn more about Jim and check out his previous features, here