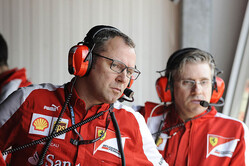 While Ron Dennis famously said that finishing second is to be the first of the losers, Stefano Domenicali appreciates that it is all his team has left this season.

Ironically, on a day Fernando Alonso sported a helmet celebrating his world championship points record, for the first time since Malaysia the Spaniard failed to score any.

The hopes of either title now finally killed off, Domenicali admits that ultimately his team failed to give its drivers the equipment with which to battle Sebastian Vettel.

"We are well aware what it's like to rack up win after win, season after season, because only a few years back, we did just that and we know how much confidence comes from winning," he told the team's website. "Taking a world title is very satisfying, doing it several times is an achievement, but it's also a good thing to always be up there, fighting for the very top places, as Ferrari has done pretty much all the time for over fifteen years, barring a handful of exceptions.

"This year, we were unable to give our drivers a car good enough to fight with Vettel on equal terms, apart from at the very beginning of the season," he continued. "Thanks to Fernando and his amazing talent, we managed to worry the world champion elect more than the others, but unfortunately, our efforts were not enough to fight all the way to the very end.

"Now, it's important to try and end this season in the best way possible. These are crucial weeks that we have ahead of us to the end of the year, because the work we are doing in preparation for 2014 is vital if we want to be the team that puts an end to this Red Bull dominance, just as we and Fernando have been their main rivals over the past four seasons."

With Ferrari now trailing second-placed Mercedes in the Constructors' Championship, the Maranello outfit is only 24 points ahead of Lotus. Since the summer break all three have been pretty evenly matched, though in the last three races the Enstone outfit has had the best of it.