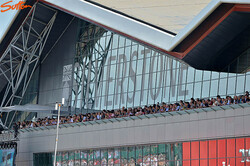 It may seem like all the action today is on track in Korea as practice begins for this weekend's Grand Prix but, in fact, an even bigger battle is taking place in Northampton.

The location of the titanic tussle is Silverstone, the home of the British Grand Prix. However, today's clash won't be taking place on track. Instead, it will go ahead inside the striking Silverstone Wing building, which opened in 2011 and, at 11am will host the Annual General Meeting of the British Racing Drivers Club (BRDC). It may seem an unlikely place for a skirmish but an article in today's Daily Telegraph by Pitpass' business editor Christian Sylt reveals that fireworks are almost guaranteed.

The BRDC currently runs Silverstone but it won't stay like that for much longer. Back in August Sylt revealed that the BRDC had sold a lease on the track and, as Pitpass has reported the news attracted some disbelief. However, it was indeed accurate. Last month the BRDC's directors announced that they had agreed terms to sell a lease on Silverstone and had also leased 280 acres of land surrounding the circuit to MEPC, a property group owned by the BT pension fund.

The bombshell in Sylt's article is that a group of angry BRDC members has threatened to prevent the directors from being re-appointed at the AGM if they aren't happy with the details of the deals. There is good reason for their concern as Sylt's article reveals that the deals will see the BRDC making a £54.4m net loss. As Pitpass has pointed out in a separate news story, this is the largest loss ever made by a Formula One track so it is hardly surprising that the members are miffed.

Although the amount of income from the lease on Silverstone has not been disclosed, the BRDC's announcement stated that MEPC has paid it £32m. This will be used to pay off a £12.7m loan from Lloyds bank and £12.4m borrowed from Northamptonshire County Council. The BRDC took out the debt to fund construction of a new pit and paddock complex which includes the Wing. However, despite this investment, Silverstone was sold for less than its previously estimated value.

This was revealed in a letter, seen by Sylt, from BRDC chairman Stuart Rolt on 24 September. It was sent to members of the club and was accompanied by the BRDC's accounts to 31 December 2012. They show that interest payments on the debt rocketed to £2.7m from £1m the previous year. Revenue reversed 6% to £52.4m whilst the net loss accelerated from £4.5m in 2011 to £54.4m last year. This was fuelled by a £49.1m one-off charge which is directly connected to the two recent deals.

In his letter Rolt states that "including depreciation (a non cash item) there was an operating loss of £3.6m (2011: loss of £3.8m) before an exceptional item of £49.1m to reflect a reduction in the accounting value of our assets."

He adds that the value of the circuit "in our 2012 accounts (unlike previous years) reflects the offer made to acquire those assets rather than a future profit calculation." In a nutshell, the previous valuation of the circuit in the accounts had to be replaced with a precise one once the BRDC had received the offer and, according to the accounts, this led to a loss on paper of £28.7m.

Likewise, Rolt states that "we sold a long lease on our built out industrial estate and the development land outside the circuit to MEPC for £32m, paid in cash. The value we received for this is considerably less (by £20.4m) than the value ascribed to this land in our 2011 Balance Sheet."

Rolt says that the land and circuit have attracted prices which are lower than their previously estimated value because of "a significant change in what the market was prepared to pay for land with development potential... It also reflected what developers were prepared to risk paying in a depressed market for commercial property outside London."

However, he adds that "the sale of a long lease of our industrial estate and development land for £32m, as described above, has transformed our Balance Sheet from the year end position, allowing our borrowings to be paid off and moving us into a cash positive position." It has nevertheless caused uproar within the BRDC.

In August 2009 the members voted to give the BRDC directors the power to grant a lease of Silverstone and non-circuit land and the two deals have been done within the allowed timeframe. Accordingly, the members can not stop them going ahead so they have come up with another way of making their point.

Papers sent to BRDC members on 11 September show that there will be seven resolutions for members to vote on at today's AGM. They include crucial steps such as appointment of the company's auditors and re-election of directors.