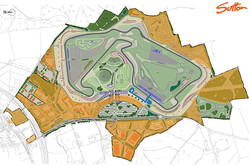 Yesterday's news about the new investment in Silverstone came as no surprise to Pitpass readers. On 17 August Pitpass' business editor Christian Sylt revealed the news after a senior member of the circuit's owners, the British Racing Drivers Club (BRDC) told him that "a deal has been done on Silverstone. I don't know who bought it and I don't know what the terms are but it is absolutely categoric that a deal has been done and not due to be announced until next month probably." Sylt confirmed the news with Formula One's boss Bernie Ecclestone who revealed that he was due to meet the new investors. It turns out that the BRDC source was absolutely right but what is most surprising is how long the news had been kept quiet.

The announcement yesterday revealed that commercial property company MEPC has paid £32m for a 999-year lease on the existing Silverstone Industrial Estate and the development land around the outside of the circuit, on which planning permission has been granted. MEPC was first linked to Silverstone by trade publication Property Week in June though the deal had not yet been done as the publication wrote that "the business and science park developer is understood to be on the verge of buying the spiritual home of British motor racing." When Sylt revealed that terms had been agreed and a deal had in fact been done it was met with some disbelief.

On 27 August Sky News city editor Mark Kleinman claimed that "the deal hasn't been done yet." In fact, not only had it been done by then, but it was actually signed eight days before Sylt broke the news in the Independent.

This is revealed in a letter sent yesterday by BRDC chairman Stuart Rolt to the 800 plus members of the club, and seen by Pitpass. It states that "I am very pleased to tell you that we have completed a transaction with the British commercial property company MEPC who have taken a 999 year lease on what we describe as the development land and the already built industrial estate. The legally binding agreement to this transaction was signed on 8th August."

There is good reason why the deal had to be done by then as the letter goes on to state that the deal was signed "before expiry of the Board's mandate from Members to effect such a transaction and that lease became effective on 5th September."

The board got the mandate three years ago and as Pitpass recently revealed, evaluation of the new investor was based on a range of criteria including: the lump sum and rent payable to BRDC; the investment proposed to be made in the site, including infrastructure and the vision for the circuit's business with regard to maintaining the future of Silverstone as the home of the British Grand Prix; the protection of the rights and benefits and the long term security of the BRDC; and creating a centre of excellence for training and education within the British motorsports industry.

Reflecting this, Rolt's letter adds that MEPC "have already asked us to arrange an indoctrination and history lesson on Silverstone and the BRDC for all their managers."

It wasn't just Kleinman who was taken aback by Sylt's news that terms had been agreed and a deal had been done. On 19 August Mark Alexander of advisory firm MTC said "Silverstone has sold some land but not the bits racing world cares about." He followed this up with the explanation that "property developer MEPC and, we believe, Artemis have brought 200 acres of land from Silverstone which will likely be used for warehousing and other non Motorsports related activities." John McCurdy, a consultant whose clients include Jonny Dodge's Grand Prix Ball, described this as "opinions by those in the know."

It isn't clear if or how Artemis fits into the Silverstone deal but there is no doubt that terms have indeed been agreed for investment in the circuit and circuit-related facilities. Yesterday's announcement made this abundantly clear as it Silverstone-news/BRDC-confirms-development-deal-with-MEPC/}said that "the BRDC can confirm that it has agreed terms with a suitable partner to further develop and invest in the circuit and circuit-related facilities. Under the terms of non-disclosure agreements the BRDC is not able to comment on any details."

That too was done long before Sylt broke the news as Rolt's letter reveals that "I am pleased to tell you we also agreed terms on 8th August with a suitable partner to take the circuit forward." The big question is who leaked the news to Sylt but his lips remain firmly sealed on that.