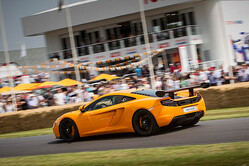 If ever there was a time that McLaren needed some good news it was yesterday. The company celebrated its 50th birthday on Monday though it doesn't have much to shout about on track. It currently lies fifth in the constructors' championship and doesn't have a single race win to its name in 2013. At the end of the year it will also lose its title sponsor Vodafone which has been with the team since 2007. In contrast, McLaren's road-car division has recently gained a very significant backer as Pitpass' business editor Christian Sylt reveals in the Daily Telegraph.

The backing comes in the form of a £50m loan from the Royal Bank of Scotland (RBS) to McLaren Automotive and the supercar manufacturer is using it to fund the acquisition of its factory in Surrey, which was opened in November 2011 by Prime Minister David Cameron.

The McLaren Production Centre was designed by Sir Norman Foster and is home to nearly 800 employees. It is where McLaren Automotive's flagship 204mph 12C coupé is built and at peak production a new car rolls off the production line every five days. Its next-generation £966,000 P1 is under development there and is expected to reach customers in 2014.

Recently-filed documents show that on 31 July the loan was secured on the entire share capital of McLaren Automotive Asia, the company's Singapore-based hub for the Asia Pacific region. RBS was the lead arranger with its subsidiary NatWest as the contracting party.

A McLaren spokesman said "RBS loaned McLaren Automotive £50m to purchase the McLaren Production Centre from McLaren Group. In so doing, RBS demonstrated that a large financial institution has enough confidence in the McLaren Automotive business plan to make a significant loan. Furthermore, the purchase of the McLaren Production Centre has given McLaren Automotive control over a major asset with which it does business - ie, the factory in which its road cars are manufactured. Moreover, that factory is required and has been specced to deliver not only the current McLaren road cars, namely the 12C Coupe and 12C Spider, but also all the McLaren road cars that are scheduled for launch well into the future, including the world-beating P1."

The deal was done with RBS despite McLaren's Formula One team having a partnership with Spanish bank Santander. It isn't the first time this has happened. As Sylt revealed in 2011, McLaren Group itself got debt from HSBC to fund construction of the McLaren Automotive factory. The two companies have different ownership with 50% of McLaren Group owned by Bahraini sovereign wealth fund Mumtalakat and the remainder split between Group chairman Ron Dennis and Saudi conglomerate TAG. The three also own stakes in McLaren Automotive but it has additional investment from Singaporean billionaire Peter Lim.

Issuing shares to new investors generated £150m for McLaren Automotive in 2011 and fuelled the first 12C production run. A total of 400 were sold by 31 December 2011, the most recent year for which accounts are available. It drove revenue to £68.9m from £6.4m the previous year. In 2011 the shareholders also provided an additional £10m in loan financing, which brought the amount owed to them up to £211.5m.

The financing enabled the development of new vehicles and during 2011 £66.6m was invested in new road car projects. McLaren also focussed on building up its dealership network throughout the year, appointing 36 dealers globally, 27 of which were trading before the year end. Another 13 retail partners were appointed in 2012 as the company pushed into new markets with dealerships launched in key markets such as the United States, Japan, Singapore and the Middle East.

It puts the company in good shape for future growth. Next comes the task of getting the F1 team back on track and time will tell whether there is as much confidence in that as there is in McLaren Automotive.