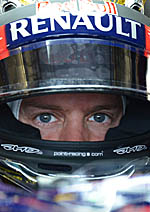 Sebastian Vettel: "It was a tough race; it was one of the toughest for a long time. I'm happy the race wasn't two or three laps longer, as Kimi was a bit quicker towards the end. I'm very happy that it worked out and it's very special. The team worked really hard to give me the chance to win this weekend and we got it. First of all you have to remember that it's a privilege to have the opportunity to race in your home country; we have around 20 races, but there are obviously more than 20 countries, so it's special to race at home and get so much support. I had a good start and then just focused on every single lap during the race. You don't really think about where you are while you are racing, you can't allow your mind to drift, but when the flag came out and the race was over I really let myself enjoy the parade lap and saw a lot of people in the grandstands cheering and waving flags. These pictures will remain in my head for a long, long time."

Mark Webber: "I knew we had lost the tyre in the pit stop of course, but not that someone got hit by it. That's bad and I hope he is okay, that's the main thing. Today was a bit of a nightmare and you want to wake up tomorrow and have another go at it. We had an excellent start and were in a great position leading up to the first stop with Seb, but we lost all of that. We lost a lot of points today and a chance to challenge for the win, but there's no rewind button now."

Christian Horner, Team Principal: "The most important thing today is that the cameraman who got struck by the tyre does not appear to have suffered any life threatening injuries. It's a timely reminder that working in the pit lane is dangerous. Everyone reacted incredibly quickly and the most important thing is to hear that he seems to be fundamentally okay. Looking to the race, for any driver to win their home grand prix is something tremendously special and after the disappointment of missing out on the victory a week ago in Silverstone, Sebastian drove faultlessly today and can be very proud of what he's achieved in his home grand prix in front of the home fans. It's a huge result for him and very positive for the Championship. For Mark, it was a strong recovery drive; he got back on to the lead lap through the pace car and then fought his way back into the points. It's a great shame that we couldn't have both cars right up there today, but all credit to Mark for his very determined drive. We need to understand what went wrong in that first pit stop for Mark, but as I said, our main concern today is knowing that the cameraman is okay."

Thierry Salvi, Renault: "We fought hard for that today. Kimi and Romain really pushed us hard, but Sebastian did a great job to win at home for the first time. Mark also drove a storming race, coming from a lap down to a points-scoring position. For Renault it is very positive to see three Renault-powered drivers racing for the win and ultimately to have a clean sweep of the podium. Although it certainly makes us nervous behind the screens!"