Brawn: This has made us stronger 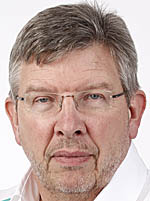 Speaking in the wake of the FIA's International Tribunal and a punishment which will only really impact test driver Sam Bird, Mercedes team principal Ross Brawn insists the affair has helped strengthen the team.

However, while some believe that the German team will use Testgate as a means of parting company with its team principal, Brawn insists the affair has made the team stronger.

"I think these events are the ones that pull the team together," he told Sky Sports. "These are the sort of events as well as racing that consolidate a team.

"I think the team was very solid in the last few weeks," he continued, "we had complete support from Stuttgart. They understood, it was very important for Mercedes that the facts of this case were understood.

"An event like this creates a lot of emotions. It would have been very frustrating if the outcome of this hadn't been what it was, but it does sometimes strengthen your resolve rather than weaken it.

"It's certainly cleared everything away now so we can focus on the rest of the year. The car is coming along well, we've got some interesting things to try at Silverstone, some improvements, and two drivers on top of their form. So I think we can now move on to the rest of the season. Certainly it hasn't diminished my enthusiasm for Formula One."