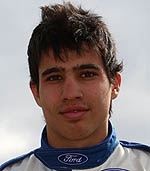 21-year-old Tio, from Larnaca in Cyprus, is now in his second season of competition with Marussia Manor Racing in the GP3 Series feeder formula and is currently leading the championship. Last year, as the team's most successful series entrant, he won the chance to drive a Marussia F1 car in Formula One's 2013 Young Driver Test, which will take place at Silverstone next month. To prepare Tio for this opportunity, the Banbury based Team opted to whet his appetite earlier than planned by lining him up for this week's test. Tio will be the first Greek-Cypriot to drive a Formula One car.

"It goes without saying that I am thrilled to get this additional opportunity to drive the MR02," said Ellinas. "I have been looking forward to the Young Driver Test since last Autumn and the weeks can't pass quickly enough. Being able to conduct the straight line test this week will help to bridge the gap until Silverstone and will also mean I can hit the ground running there as I will already be familiar with the car systems and the team's procedures. In the meantime I have been trying to focus on my GP3 season as I want to give it my all. I can't pretend I'm not excited about the F1 tests and I would like to thank the Marussia F1 Team for the faith they have shown in me. I hope to do a good job to reward that."

"Tio has done a very impressive job for our GP3 team over one and a half seasons now," added John Booth. "We were very pleased to welcome him back for a second term and even more delighted when he brought us our first victory of the season in the opening round in Spain. He is definitely a star of the future and deserves both of the opportunities that we are putting his way, starting with this week's aero test at Kemble. This will provide him with some good familiarisation time with the car, which will then enable him to push when we get to the Young Driver Test next month. We look forward to seeing what he can do."