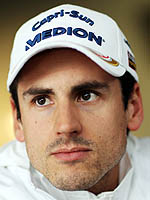 When the rain came down it washed away Adrian Sutil's hopes of a strong qualifying performance. The German set the ninth fastest time, promoted to eighty courtesy of Kimi Raikkonen's penalty, but feels he could have achieved more had the conditions remained dry.

"The car was good in the dry and I felt very good in it," he smiled after qualifying. "The whole weekend so far was competitive and I think we've improved our pace today.

"We were looking for one of the best qualifyings and then the rain came in and destroyed our plans."

It was a lack of confidence which ultimately cost the 31-year-old, he admits. "With these tyres I just don't feel comfortable in the car," he explained of the wet conditions. "We had so much oversteer and we don't know what the problem is."

But that alone is not the whole story, Sutil believes, the gap to the leaders suggesting another factor is also at play. "The pace is like four seconds slower than pole position," he reasoned. "If the car has downforce in the dry it should have downforce in the wet, so we have a problem somewhere."

Such disappointment of his ninth place qualifying result, which last year would have been perfectly acceptable, must be seen as a sign of the burgeoning early season strength and confidence emanating from Force India.