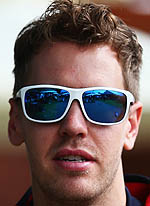 Tyre management is a term Formula One fans are going to have to grow accustomed to as the 2013 season wears on, according to Sebastian Vettel.

After qualifying on pole and racing his way to third place last weekend in Australia, the German believes the key differentiator could be how a driver looks after their rubber.

"Everyone has the same possibilities," he told reporters in Sepang on Thursday. "How you work with the car, how you set up the car, how you drive the car… but this is how Formula One has been for the last couple of years."

Set up issues in Melbourne meant the Red Bull driver was unable to capitalise on his pole position after high tyre wear prevented him from running at the pace of those ahead.

"We probably didn't have enough pace in the race which has a direct link to tyre degradation," he admitted. "But we still managed to get a very good result.

"The problems we've had in the race, suffering with the tyres, we didn't expect it to be that much of a problem to be honest," he added. "We'll see tomorrow how bad or how good it is. I need to treat the tyres a little bit better and go a little bit further."