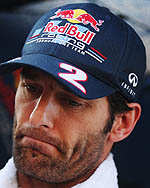 Mark Webber's race was effectively over before it began after an ECU issue meant the local hero drove without telemetry or KERS for the early part of the race.

The failure occurred on the formation lap, preventing Webber from completing the usual pre-race procedures as the cars work their way around to the grid, thereby compromising him for the start.

"We had absolutely no idea what the car was doing in terms of KERS, in terms of clutches, all sorts of stuff," explained a clearly disappointed Webber. "We lost KERS as well for the majority of the first part of the race, so that made it very difficult."

A slow getaway was therefore inevitable, Webber dropping to seventh by the end of the first lap. From there high tyre wear meant an early stop which left him in traffic and further compromised his race.

"That's what happens when you're out of position," Webber conceded. "It's hard to pick guys off, like Button and that. Without KERS it's hard to line them up on a track like this."

Team boss Christian Horner shared his driver's disappointment and couldn't help but take a swipe at ECU supplier McLaren. "It's something they need to get on top of because there's been a lot of issues during testing," he moaned. "We lost all telemetry on the formation lap and then you can't do the preparation that you need to for the start so then he's blind for the start and that ECU issue shut the KERS down as well. By the time we'd reset the whole system he'd obviously lost the start, lost early ground."

The news was not all bad though, Horner is of the opinion that the high tyre wear was the result of cooler conditions mixed with the set-up direction the team chose, and therefore curable for future races. "Seb got a good start, built up the lead we wanted and then it was quite clear that the car was pretty heavy on the tyre," he explained.

"Then when you run in a bit of traffic as well that puts more stress on to the tyre," he continued. "But I think probably the conditions were a significant factor today and we were just out of the window. All things considered, third place is actually a very, very good result."