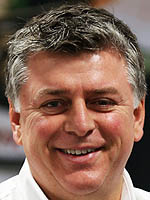 Sahara Force India's Chief Operating Officer, Otmar Szafnauer, is under no illusions as the new season approaches however, he is fully confident that the team is making good progress.

How did the team approach the winter and its preparations for this season?
The technical regulations haven't changed much and the sporting regulations just slightly, so we haven't had a huge upheaval. It's just a continuation of last year's development really. However, operationally we've made some improvements over the winter.

Can you elaborate on that?
We've strengthened race engineering and our strategy group, and our simulator programme has been bolstered. We have a dedicated simulator engineering team now, which we didn't have last year, and increasing simulator time will bring a benefit to our race programme. We've significantly increased our CFD capability with new hardware, along with an increase in human resources. Operationally those were the big changes. Our focus over the winter has also been on improving our pit stop times and consistency. We need faster pit stops, and faster more often.

How would you define the team's targets for the season?
I think the general aim is to continue with the car performance we showed towards the end of last year and successfully introduce the operational improvements. From a global perspective, that is what we are looking to do. For what place we will be fighting, I can't tell you yet. From a car standpoint and operationally, yes, we're looking to improve. Where we left off at the end of last year was a very good place - at times we were often the fourth quickest car on the circuit. So there are lots of reasons to be optimistic we can build on that.

Dr Mallya spoke last year of increased capital investment. Is the new CFD infrastructure part of that?
Yes that's part of it and the wind tunnel is the other part. We've embarked on a programme to build a new tunnel, but that will not help this year or 2014. In fact it could detract from it - if we are busy fitting a new tunnel, we have to be very careful that we don't take our eye off the ball.

You mentioned 2014 - at what stage will the team switch its development focus from the VJM06 to the first turbo car?
It's a difficult one. You've got to understand where you are in the championship and whether you can gain or lose a place, and if you can't, then you can switch your resources earlier. If you can gain, then you have to decide what proportion of those resources you switch so you don't shoot yourself in the foot in the current season in order to get a bit of an advantage for next year.

2012 was a very competitive season up and down the field. Do you expect to see more of the same?
Because the rules haven't changed that much I think it will be a continuation of 2012. It went down to the last race and I think 2013 will be equally as exciting, whether it's in the midfield, or up front. It will be interesting to see if any teams can do a better job than they did last year and move forward - which of course is what we are looking to do. We're very optimistic. We've been working hard over the winter, trying to make improvements where we know we can find performance and we look forward to starting winter testing.

Check out our VJM06 gallery, here.