Domenicali: Our approach must be right from the start 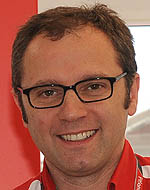 Nobody knows better what is expected indeed, demanded of Ferrari this year than team boss Stefano Domenicali, the Italian aware that the F138 must be a winner from the outset.

"There are areas of development on the car which will be very important, from now until the end of the year," he told reporters at today's launch. "We have a clear goal, which is to give Fernando and Felipe a competitive car, at the highest level. Then, it will be our drivers and the team that can make the difference.

"Our approach from the first race on must be the right one," he continued, "and we must be mentally ready to deal with very tense moments. We definitely don't want to find ourselves having to fight like last year to close down a 1.6 second gap to the fastest.

Asked about his expectations for 2013, he replied: "We spoke of this a few days ago and I reaffirm that it is hard to maintain concentration and not spend too much time looking at what's going on elsewhere. Better to concentrate our efforts on ourselves and ensure we manage the tension, otherwise there's the risk of giving a helping hand to those who are fighting the same battle with the same aims. If we come up against surprises in the early part of the season, we will try and stay focused, prioritising the reasons why things have not gone as expected."

In terms of the development programme for the F138, Domenicali said: "According to our planning, there will nothing too revolutionary, but rather an implementation of what we have seen so far. In my opinion a serious team has to focus on the fact that, in 2014 we face a completely different season in terms of the regulations and therefore, we must concentrate on bringing into play the right resources."