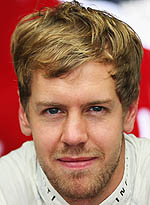 Sebastian Vettel will start tomorrow's Brazilian Grand Prix from the second row of the grid after setting the fourth fastest time in qualifying. Alongside the German is teammate Mark Webber, the Red Bull pair locking out the row after McLaren claimed the top two spots.

However, while fourth is down on what Vettel had in mind heading into the session he fared better than championship contender Fernando Alonso, who could manage just eighth in the sixty minute session, though he will start seventh thanks to Pastor Maldonado's grid penalty.

"Q2 was good for us, but I made a mistake on the first lap of Q3 in Turn 4," Vettel confessed. "I was happier with the second lap in Q3, but it wasn't quick enough."

Despite the fact he could become the sport's youngest ever three-time world champion (as could Fernando Alonso), Vettel claims he will approach the race like he would any other.

"All in all we are in good shape. We've been competitive all weekend. We'll see what we can do tomorrow."