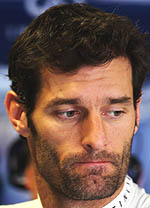 Mark Webber became the second driver to be penalised after the Singapore race when he was handed a twenty second penalty.

The penalty came as a result of his pass on Kamui Kobayashi in the closing stages when the pair went wheel to wheel into Turn 7. The Australian left the circuit to complete the move, a point the stewards took exception to.

"Notwithstanding that the distance by which car 2 left the circuit was minimal," the stewards note read, "advantage was gained hence a breach did in fact occur. Such a breach has consistently attracted a drive-through Penalty."

Speaking after the race it was clear Webber was not expecting to be punished: "We were racing pretty hard and fair," he said. "I think we used all we could down there; it was a good clean fight."

As the penalty was applied after the race twenty seconds was added to Webber's time. It drops the Australian from tenth to eleventh in the final results, thereby promoting Sauber's Sergio Perez into the points.

It is the second such penalty that Red Bull has received after Sebastian Vettel was found guilty of a similar move on Jenson Button in the German Grand Prix. There, as in Singapore, a twenty second penalty was handed out.

"I would be amazed if there was any ramifications from that," Horner said before the stewards hearing. "The leader dictates the pace. I was concerned that Jenson nearly drove up the back of him.

"It seemed to be in the middle of the corner and it seemed that Jenson misjudged it completely."

Naturally McLaren boss Martin Whitmarsh did not share Horner's view. "You control the pace but when you go, you go, as Jenson himself said you don't then hit the brakes halfway through a corner. I think we're very lucky not to have a big accident.

"They were both quite lucky," he added. "They could have gifted Fernando even more points between them."

The stewards ultimately sided with Red Bull, stating that "an examination of the telemetry overlay for throttle, steering and brake traces of both cars did not indicate any erratic driving behaviour of the race leader."