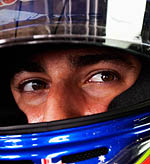 Daniel Ricciardo: "I had a normal start and held position on the opening lap, so at least we did not make life more difficult than it needed to be. However, it was clear in the opening laps that I could not patch the pace of those cars around me and I was fighting quite a bit with some understeer. After that, I lost places to the Saubers and Rosberg and could not stick with them. At the first stop, I asked for some more front wing to get rid of the understeer and the second stint was a little bit better. I ran the final stint with even more wing and that was the best the car had been all afternoon and I was hoping to catch Di Resta, but with eight laps remaining, I started to lose grip at the rear end and that was it. We tried a bit of everything today, but unfortunately we did not have any answers."

Jean-Eric Vergne: "I am at the same time disappointed and happy at the end of this race: happy because the performance was quite good and disappointed as we were unlucky to have a puncture, which meant I had to make a very early stop which ruined the race. Actually I had a bad start, dropping to 20th but still, I managed to cross the line 13th at the end of the first lap. The car was running well enough to get a better result. The car definitely seems to be working better than it did in the last few Grands Prix, so that gives us hope that we can improve still further at the next race. We only have a few days to go till Hungary where I have usually gone well in the other formulae, but this is Formula 1, so we will have to wait and see."

Franz Tost: "Yesterday, we saw that as expected, we were more competitive in the wet, which meant Daniel started from eleventh and Jean-Eric from fifteenth. However, in the dry, our car is lacking some pace at the moment, so to finish thirteenth and fourteenth is about the best we could have expected from a race with just one retirement and no possibility to gain any advantage through strategy. Jean-Eric's race was further complicated by an early puncture which meant he had to pit a total of three times rather than two. Back in the factory and wind tunnel, we are pushing hard to deliver new upgrades and we hope these will allow us to make a step up in performance terms."