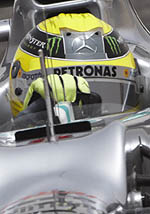 Nico converted second place on the grid into a second-place finish this afternoon, Michael retired from seventh position following a fuel pressure problem.

Nico ran a one-stop strategy from P2 on the grid, starting on super-soft tyres and changing to softs on lap 27. Michael was forced to retire on lap 64, owing to a fuel pressure problem that began to slow him on lap 58. Nico has scored 59 points in the last four races, the most of any driver in the field.

Nico Rosberg: It's a fantastic feeling to be on the podium at my home race in Monaco today in front of all my family and friends. The team have done a really good job this weekend to get the car working so well. Although we thought this track would suit our car, it's been better than we expected. I had a clean start but Mark drove a very controlled race today. I could keep in touch with him but we all know how difficult it is to overtake around the streets here and there just wasn't a way past. Still I'm more than happy with second place, and it's great to get another podium for the boys here, and everyone back at Brackley and Brixworth. I can't wait to get to Canada now and keep the momentum going.

Michael Schumacher: What can I say? It was simply a pity to end the race in this way. In any case, the fuel pressure problem had nothing to do with the incident at the start. But it made it doubly disappointing because I had secretly been hoping for a podium finish today. I will take the boost from the high points of this weekend with me to Canada. The track should suit us and I'm hoping to have a normal, clean race.

Ross Brawn: Nico ran a very good race today and did all he needed to do. I think we made the right calls but nothing opened up for us. It was a race that was about managing gaps and finding the right windows in the traffic; the team did a great job on that. Nico was the first of the front-runners to stop, but the harder tyre took a lap or two to come in and it wasn't enough to jump Mark. As for Michael, he was hit on the run to the opening corner which cost him positions, but was very quick when a fuel pressure problem started to slow him later in the race. We tried to continue but it was costing him too much time, dropped him out of the points and forced us to retire the car. It was very disappointing because he put in a great performance this weekend and he was still on course to score useful points. We need to make sure we eliminate the problems for him, starting in Canada.

Norbert Haug: It was a strong race for Nico and our team, and we were in with a chance of winning until the chequered flag, but Mark did not put a foot wrong all afternoon ahead of Nico. Looking at the results today, Fernando Alonso, Sebastian Vettel and Lewis Hamilton - who lead Nico in the championship- all finished behind him, and this helped him close the gap at the top of the standings to 17 points. That translates to an average of fewer than three points a race separating Nico from the championship lead after six rounds of the championship. It was a pity for Michael: he clearly demonstrated this weekend that he has the speed to win races but his time will come again, like yesterday when he posted the pole position time.