Allison: Our aim is true 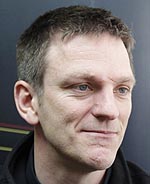 Speaking after a race which promised so much but delivered so little, Lotus technical director James Allison remains convinced that his team the good times are coming.

"I'm sure people are going to get bored of us saying 'so near, yet so far' or 'if only' or 'it's going to come good'," he told his team's website. "Nevertheless this weekend just reinforces the feeling we've had in the first two races, that there is a lot of goodness to come this season with this car. We are going to start scoring points in a decent way very soon.

"We were very, very close to it in China," he continued, "and although we didn't quite make it stick, we chose the right strategy for the day and we very nearly turned it into an excellent result.

"The only thing that undid us I think was probably not going quite long enough in the second stint with Kimi, which left him with just a little bit too much to do at the end. There are good positives to take, though. Both cars were well balanced throughout the race. Both drivers were competitive. We were well beaten by Mercedes, but so was everyone else.

Asked why the upgrade package didn't appear to improve things, he said: "We weren't able to unlock the pace we thought we had brought with the upgrades and that was frustrating. It was a very awkward weekend and not just for us. We were dealing with a tyre that was just popping in and out of the edge of its operating window from a temperature point of view. That made it ever-so-hard to make coherent decisions about whether what you had done to the car was a good thing or a bad thing. That was confusing for us, but we pulled everything reasonably back together.

"The car was very well balanced in the race. You could see from Romain's results that it ran its tyres very nicely. You could also see from Kimi's first stint, where he was right on Button's bumper for the whole of that period, that our wear and degradation on the option was strong. We very nearly made a two-stop race stick for a strong result."

Looking to next weekend's race. "We go to Bahrain knowing that we're going to have more consistent temperatures with the tyres!" he said "That will allow us to assess the upgrade package with a more level set of conditions. We'll get as much of it on as we can prove is good. There are a couple of new bits coming for the car, such as a new pushrod. We will benefit from more time with the bits we took to China but ultimately didn't use for the race.

"We're racing back on the original configuration as last used in 2009," he revealed. "It'll be the first proper test of our braking systems for the year. We don't anticipate any problems, but it will be one where we need to pay a little bit more attention to wear and temperature. It's also a circuit where we need good traction - turn 1 for example and turn 10 especially as it's very slow speed. We have identified this as an area where the E20 needs some work so it will be interesting to see how we perform."

Asked how the team prepares for a track with high braking demands, he replied: "We do track comparisons, so from knowing the demands of Jerez for example we can calculate how the brakes should work at Bahrain. We do work on a brake dyno, where we simulate the loads which the brakes will experience at a circuit and this helps evaluate wear and cooling. We don't think there will be any dramas; of course we could get a surprise. Last time out in Bahrain, the track was longer - meaning fewer laps - so there were less occurrences of heavy braking zones, and more time between them."

Finally, following the protest in China, is Lotus considering its own 'Double-DRS', which ironically Nico Rosberg didn't need on Sunday. "We are at the point of making estimates of how big the gain might be and assessing the difficulty in actually realising that gain. It's anyone's guess how powerful any existing system is, but that's not the issue; it's how powerful we think we can make any system which we can develop now we know how the rules can be interpreted.

"There are systems like Mercedes has," he added, "but the interpretation allows other permutations too. So it could be an interesting time for developments in this area."