Webber's is the lone voice 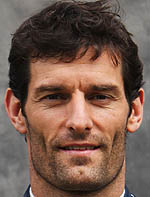 While there was a deafening silence at today's FIA press conference when those present were asked about Bahrain, elsewhere Mark Webber remained the one lone voice prepared to speak out.

The topic of Bahrain is virtually taboo in the F1 paddock with team bosses, drivers and personnel all following a strict party line, in most cases not even having the guts to say "no comment". However, as was the case last year, Webber remains not only the voice of reason, but the sole voice.

"Ultimately it is a car race," he told reporters in Shanghai. "There are a hell of a lot of people in the world who don't have a clue there is a grand prix in Bahrain next weekend so let's not get too wrapped up in our own bubble about how important it is. Things can get called off in a flash.

"Ultimately we are all human," he continued. "We have morals. We have ways we see things. I have tried to watch the news to get the most balanced view that I can possibly get without getting too corrupted by false information.

"I want to race," he admitted. "That is what I would like to go there and do. But saying that you cannot ignore the fact that all of us, in the backs of our minds, want it to go down smoothly and don't want it to be involved in the unrest. We want the people out there to support our race. That is why it is so sensitive."

As they say, Aussie grit.