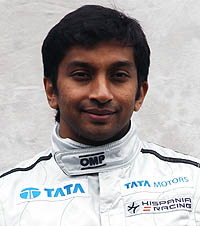 The first Formula 1 Indian Grand Prix in history, which took place at the Buddh International Circuit today, saw Narain Karthikeyan write a page of history in his native country by finishing the race in 17th place ahead of his teammate Daniel Ricciardo. After yesterday's penalties which forced them to begin the race from 22nd and 23rd place, Ricciardo and Karthikeyan had a great start and made their way to 15th and 16th position in the fourth lap. However, the planned two stop strategy for both drivers was affected as the tyres behaved anomalously towards the end of the race as a result of the cars moving on to the dirty part of the track to let cars through with blue flags and because of a few setbacks during pit stops. These setbacks did not stop Karthikeyan and Ricciardo from running competitively throughout the whole race though as they finished in 17th and 18th respectively. The next Grand Prix and penultimate race of the season will take place at the Yas Marina C ircuit in Abu Dhabi in two weeks.

Narain Karthikeyan: "I had a great grand prix and I really enjoyed myself, it was an amazing experience. To finish 17th in my home grand prix is the best I could have wished for with the car we have and beating my teammate and one Lotus on the way makes it all the more satisfying. It's a shame I faced the penalty and, perhaps, we could have had a much better race without it. But I made a good start and then suffered some damage to the front wing but afterwards I picked up a good rhythm and was able to complete a good race. It's an awesome feeling to have completed the first ever Indian Grand Prix and to have been competitive with our main rivals which proved a lot of points".

Daniel Ricciardo: "The first laps weren't great but then I managed to pass a few people. Some laps later I got past Narain and set a good rhythm; I was happy with the first stint as everything was going well, the balance was good and the tyres were performing well. In the second stint I felt a strange feeling in the front of the car after a couple of laps, the car was moving quite a bit from left to right, I still don't know the reason for this but it might have been a puncture. It's a shame because as a cause we had to do an extra pit stop and lost quite a bit of time with that. In the third stint, once we found our pace we were quite competitive. It ruined the rhythm of our race but hopefully we can avoid it from happening next time".

Colin Kolles, Team Principal: "The team has done a very good job this weekend and this is the most important. Despite the penalties, we were going into the race with high hopes because both Narain and Daniel proved to have a pretty good pace. They did a lightning start and saved the first lap incidents. Their pace was good and it was fantastic to see both HRT cars in the middle of the field. Because we ran on the dirty side of the track as a consequence of the blue flags, the tyre degradation became too big and we were forced to change our strategy. Additionally, Daniel had a problem on the rear right wheelhub assembly forcing him to have a longer additional stop. This prevented us to finish further up but, overall, I am satisfied with how things went this weekend and I'm really happy for Narain because racing at a home GP for the first time is a once in a lifetime experience. I'm proud that he had a fantastic weekend and managed a great result . Daniel has done well too over the three days and he also did well in the race going one step further".