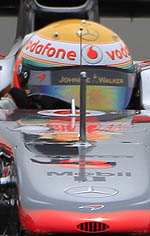 Lewis Hamilton: "It was an incredibly eventful hour: it's hard work trying to determine exactly what's happening with the weather and what tyres are needed, then finding the gap and getting a good lap under your belt.

"One of the biggest worries is that the track is drying all the time, so you're always pushing to find the grip; but you also have to be mindful that you can come around on the next lap to find that it's raining again, which can catch you out. That's why it's such an amazing and unpredictable venue.

"At the end of Q2, I came across the two Williams cars going quite slowly. I was able to get past Pastor [Maldonado] at the final corner, but I lost a little time in so doing. At the exit of Turn One, once we'd taken the chequered flag, we made contact; but fortunately I got back to the pits and the guys were able to change the front wing and patch up my sidepod. As ever, they did a great job to get me out again for Q3

"The fortunate thing is that we were therefore able to complete the final session. Most importantly, too, we're in a great position to fight for the race win tomorrow."

Jenson Button: "Failing to get into Q3 was a misunderstanding between the team and me. I'd just done a fast lap, and was cooling the tyres, not knowing that there wasn't any more time left in the session. If I'd known, obviously I wouldn't have slowed down on my final lap.

"Obviously, with the track getting drier with every lap, it was vital to be going quickly until the end of the session. I think I was second- or third-quickest when I did my lap; it's just a pity I that didn't get a chance to put in another lap.

"It's very disappointing. Obviously, in Q1, I was a second quicker than everyone. Our car is clearly one of the quickest around here, and it's going to be tough starting back in 13th. But I've just got to deal with it now. I think I'll just have a cup of tea and move on from it."

Martin Whitmarsh, Team Principal: "Lewis drove a great lap in Q3 this afternoon and will start from the front row of the grid for tomorrow's race as a result.

"On his last lap in Q2, he caught and passed Pastor; it was a move that he had to make, because he was driving flat-out on a hot lap towards the chequered flag when he came upon a slower car [ie, Maldonado's].

"Then, after the chequered flag, on the slowing-down lap, their cars touched. Damage was caused to Lewis's car, but fortunately it was light damage that our mechanics were able to rectify in time for him to compete for pole position in Q3. In the end he missed out on pole and ended up in P2, but clearly that's a very good position from which to start tomorrow's race.

"By contrast, Jenson had a disappointing afternoon. On a drying track, which was getting quicker all the time, he backed off on what would have been his final lap in Q2.

"We'll investigate exactly why that happened, but with hindsight perhaps we should have instructed him to keep pushing because the fact that he backed off showed that he wasn't aware that he was on his last available flying lap.

"Consequently, when he backed off, other drivers who had kept pushing were able to improve their times on the grippier track surface that the drying track provided, and as a result Jenson was bumped down to P13.

"I'd classify it as a misunderstanding, and Jenson does too. But we all know what a gritty competitor he is - and, undoubtedly, he can score points from P13. Race day at Spa-Francorchamps is always notoriously unpredictable, and Jenson's ability to plan and pace a race in tricky and changeable conditions may well yet pay dividends this weekend."