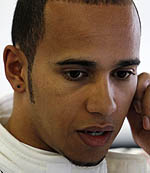 Radio problems and a mid-race spin ended Lewis Hamilton's hopes of a podium result in the Hungarian Grand Prix. Having led in the early exchanges the McLaren drivers' race fell apart after a spin resulted in a drive-through.

"My left front tyre was pretty worn, so I went a bit wide, came out of the chicane and spun," explained Hamilton. The spin attracted the attention of the stewards, who were unhappy with the way he re-joined the circuit. Spinning his car around in the middle of the track, both teammate Jenson Button and Force India's Paul Di Resta had to take evasive action to avoid the McLaren, a fact Hamilton was unaware of at the time. The result was a drive through penalty which dropped him down the order.

However, by the time stewards had reached their decision Hamilton's race was effectively over anyway. When the rain began to fall his team called him in for a change to intermediate tyres. "We were having radio issues," he explained. "I could hear my engineers, but they couldn't hear me. I was constantly asking for information but they couldn't hear me. It was a very difficult call for them.

"I heard them say it's going to rain, and it was already spitting, so we opted to go for the wet tyres," he continued. "They called me in, and I did the lap. The tyres went off. It wasn't necessarily the best call, but that's motor racing."

Fourth place was realistically the best he could have hoped for after his afternoon's exploits. Hamilton passed Massa for fifth when the Brazilian pitted before muscling his way by Mark Webber with seven laps remaining.

Clearly disappointed Hamilton did his best to maintain a positive outlook when confronted by the media post-race, congratulating his teammate while barely suppressing his frustration with his own performance. "We were quickest and we should have really won," he said. "At least one of us in the team got the win. It's a shame we didn't get a one-two, but that's really my fault."