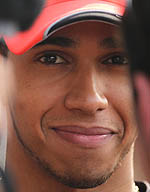 Lewis Hamilton: "It's a shame today was so wet, because I really wanted to put on a good show for all the fans - they had to brave some pretty cold and damp conditions all day, so I'm pleased that it looks like the weather will improve for the rest of the weekend. Fingers crossed.

"Despite the lack of running, today was actually quite encouraging; we tested a couple of things and I managed to pick up quite a decent feeling for the car.

"It's going to be interesting tomorrow if it's dry, because I think our car is looking quite good. The new rear wing also felt quite positive, but we've still got to decide whether we carry it over into tomorrow and the race itself."

"The reason I went to the stewards was to discuss the correct usage of DRS in wet conditions: the rules don't clearly state whether you can use DRS on slicks in wet conditions, which is what we did this morning. The stewards just wanted to understand so that they could tighten the wording of the regulations for the next race. I also suggested a couple of tweaks to make the regulations clearer and safer, so it was quite a useful visit."

Jenson Button: "Today was a bit of a frustrating day for me; we thought we'd get some good running under our belts this afternoon, but the rain meant that didn't happen, and we didn't really get a chance to evaluate everything.

"The balance was okay in P1. Hopefully, it's not going to rain for the rest of the weekend, so we should be able to get a better read on how the new interpretations of the regulations will affect us from tomorrow. We don't really know if our new rear wing is an improvement over the older version. It has a different downforce level, but I'm still not sure what we're going to run for the rest of the weekend.

"The new facilities here at Silverstone are great - the only problem is that, at our end of the pitlane, we can't see the fans and they can't see us! Still, it's a fantastic effort from everybody involved."

Martin Whitmarsh, Team Principal: "From an engineering perspective, today was quite frustrating because the constantly changing weather and track conditions made it difficult to gather any meaningful comparative data on the new components and new engine modes we'd brought to this race.

"Nonetheless, we were able to conduct some useful running, and the onus is now on the engineers to devise a good direction for the rest of the weekend, which looks set to be more predictable than today's wet weather.

"It's always exciting to arrive at Silverstone for the Santander British Grand Prix, and I want to commend everybody involved in the construction of these fantastic new facilities. Silverstone has always been one of the greatest grand prix tracks in the world, and the new pit and paddock complex confirms it as a truly world-class venue that lacks for nothing compared with other leading venues on the Formula 1 calendar. I'm really looking forward to a fantastic weekend of close racing."

To check out our Silverstone practice gallery, click here.