A car manual with a difference 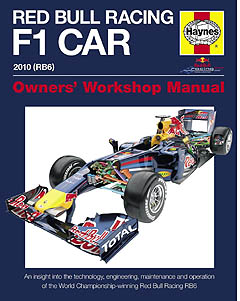 The engineering talents of Adrian Newey are widely credited as a major component in Red Bull Racing's success, but the World Championship triumph involved a huge level of commitment from every one of Red Bull Racing and Red Bull Technology's 550 employees. The pace of development was astonishing, as the team pushed hard to stay ahead through innovation, determination and sheer hard work.

Haynes' Red Bull Racing F1 Car Manual, produced with the full cooperation of Red Bull Racing, takes a unique look under the skin of the RB6, explaining in unrivalled detail how a modern F1 car is designed, constructed and operated, and how its complex systems work.

With a level of openness rarely seen in F1, the Manual also outlines the technical developments made throughout the 2010 season to keep Red Bull Racing out in front, including double and blown diffusers and the F-Duct.

Exclusive technical illustrations, alongside detailed photographs of the car itself, accompany the fascinating text, which covers:

The Designer's View - the design process, optimising the 'package', wind-tunnel and CFD simulation, testing and development.